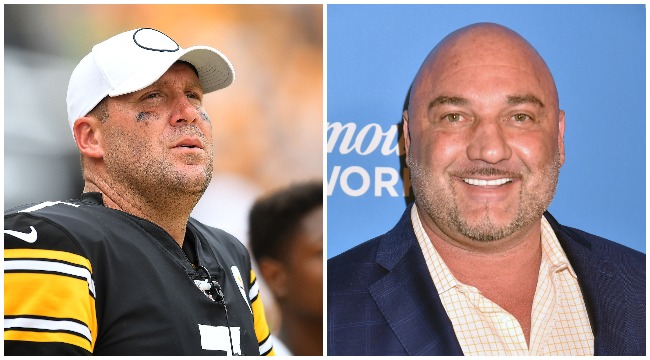 Throughout his 15-year NFL career, Ben Roethlisberger has endured a severity of fat-shaming that makes Eddie Lacy look like an Olsen twin.

3.5 months of IR and Ben Roethlisberger looks like very fat person/animation with a beard 😂 pic.twitter.com/Uu6Wp0UDab

All I did was call Ben Roethlisberger Captain Fat Fuck a couple times. I didn't even tag him. pic.twitter.com/Fyj2Hp4QW9

“First of all, let’s not put the words fitness and Ben Roethlisberger together, they are allergic to each other. There is no fitness in Ben Roethlisberger. His idea of a great off-season workout program is doing one yoga session, playing golf, and drinking some beer. However, yes, what Mike Tomlin and Roethlisberger have done there has been incredible.”

Ben, who’s rehabbing after elbow surgery, did not appreciate Glazer’s mockery of his fitness routine. Glazer was recently a guest on “The Jason Smith Show” and revealed that Ben personally called him out.

“I make fun of Ben all the time and he makes fun of me,” Glazer stated. “It’s a locker room. We get after each other. But he was honestly upset by this and I credit him, too, that he called me back about it, or that he reached out. Because he reached out and then we talked about it. As a man, if you’ve got an issue with somebody, you call him. That’s why I called him. He called me back and we handled it and we hashed it out. And yeah, he’s like, ‘I am rehabbing,’” Glazer said, via Steelers Depot.

A month ago, in a profile with Post-Gazette’s Ron Cook, Roethlisberger addressed the hundreds of memes poking fun at his bloated figure.

“I’ve heard people say I’m fat, and that just blows my mind,” Roethlisberger said. “I’m lighter and in better shape than I was in either of the past two years. I haven’t stopped working out. I normally don’t work out in the offseason, but I’ve been doing everything five days a week with my trainer. Cardio twice a week. Legs twice a week. Upper body twice a week …

“I guess it’s my beard that makes me look heavier. I must have five pounds in that, I know. But I’m not overweight.”

As a man whose gained 14 pounds in quarantine, I refuse to comment on this situation.