76ers Are Reportedly Furious With Ben Simmons, Believe He’s ‘Faking Injury And Mental Illness’ In Order Not To Play 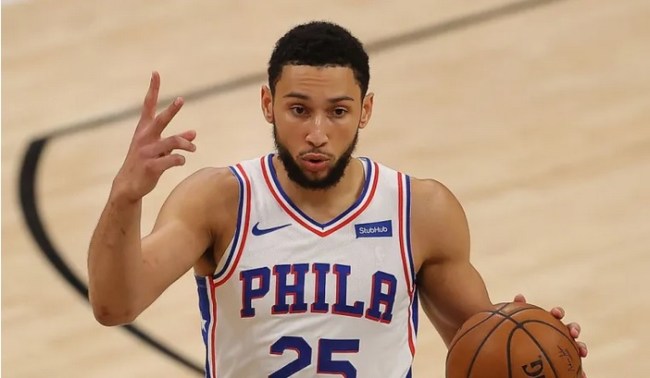 Ben Simmons has a new excuse as to why he can’t practice and nobody believes him.

Earlier this week, Simmons was kicked out of practice by head coach Doc Rivers after refusing to participate in team drills.

On Thursday Simmons showed up to his individual workout with the team and claimed he had “back tightness.”

Ben Simmons described back tightness to several Sixers staff members and was briefly treated for it today, sources tell ESPN.

Ben Simmons described back tightness to several Sixers staff members and was briefly treated for it today, sources tell ESPN.

Simmons went on to tell the Sixers that he’s not “mentally ready” to play at the moment.

Sources: 76ers All-Star Ben Simmons is currently not mentally ready to play for the team and was receiving treatment on his back today due to ramp up process. He will miss Friday’s home opener vs. Nets and is not expected to play for an undetermined period of time.

The Sixers are skeptical about Simmons’ latest injury claim according to Kyle Neubeck of the Philly Voice.

Ben Simmons had not received treatment for or acknowledged any sort of back pain prior to Thursday, and multiple sources contacted by @thephillyvoice earlier in the week expected a health claim to emerge following his suspension on Tuesday https://t.co/CjmBFRsM5A

Via The Philly Voice

One major point of contention at this juncture — multiple sources who spoke with PhillyVoice about Simmons’ suspension from the team on Tuesday and Wednesday were prepared for Simmons to use some sort of health explanation to avoid playing in Friday’s game against Brooklyn. According to a source familiar with the situation, Simmons’ back tightness had not previously been mentioned or treated during any discussions with team staffers over the last week and a half, brought up for the first time when he showed up at the facility on Thursday. When Simmons went through his return-to-play protocol last week, Simmons returned a clean physical and had not undergone any sort of additional treatment under the care of the team.

Apparently, the team is furious with Simmons for using mental illness as an excuse not to play.

According to Sources, belief by #Sixers Ben Simmons is faking injury and mental illness. He came in 2day and said he had back stiffness and mentally not ready to play. Mental illness is serious issue and team is livid Simmons went down that road. Team plans to fine him every game

It seems like the Sixers-Ben Simmons drama is going to get uglier by the day.