Ben Simmons Is Reportedly Being Pitched The Idea Of Joining The Lakers By His Girlfriend, Kendall Jenner 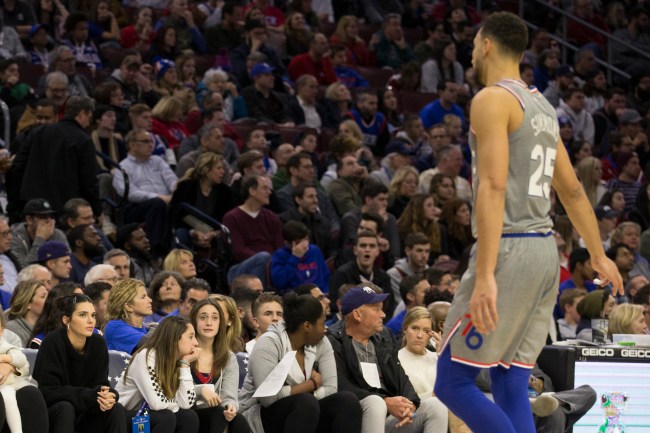 Ben Simmons and the Philadelphia 76ers might be slowly piecing things together this season after a second-round appearance in last year’s NBA Playoffs, but could the reigning Rookie of the Year and former No. 1 overall pick be looking for greener pastures already? According to reports, he may just be.

Simmons, who’s dating Kendall Jenner, apparently is already being pitched the idea of moving out west in a couple of years once his contract with Philly expires and he’s a free agent — and the Los Angeles Lakers are the desired destination. At least that’s what FS1’s Jason McIntyre told my buddy Brandon “Scoop B” Robinson last week on the Scoop B Radio Podcast, via Heavy.

“We know dating back to before the draft, Ben Simmons loves LA,” Jason McIntyre told me last week on the Scoop B Radio Podcast.

“Dating Kendall Jenner, loves it out here, he’s on that same agency that LeBron is repped by, Klutch [Sports].

“They’re friends on the court but they don’t hang off the court.”  he said.

“I think Ben Simmons wants to be in LA badly,” says McIntyre. “We’ll see what happens.”

This kind of makes sense for a lot of reasons. First, as McIntyre mentioned to Scoop B, Ben Simmons is part of the Klutch Sports family, which just so happens to be LeBron James’ agency. That leads to the speculation of Ben Simmons and LeBron wanting to play together, which is something James considered this past summer as a free agent, speaking highly of the former No. 1 overall pick, and even posting something on Instagram about how Simmons is the next coming, so to speak.

Of course, the final straw could be Ben Simmons’ relationship with Kendall Jenner, as she’s based in Los Angeles, so, you know, they might want to try being a little bit closer than across the country. That’s assuming they even make it another couple years till this could become a potential option, though.

With Simmons locked into a four-year deal with the Philadelphia 76ers until 2021, so this may just be a long-term dream until then. Guess we’ll just have to see how this all plays out over the next couple years.