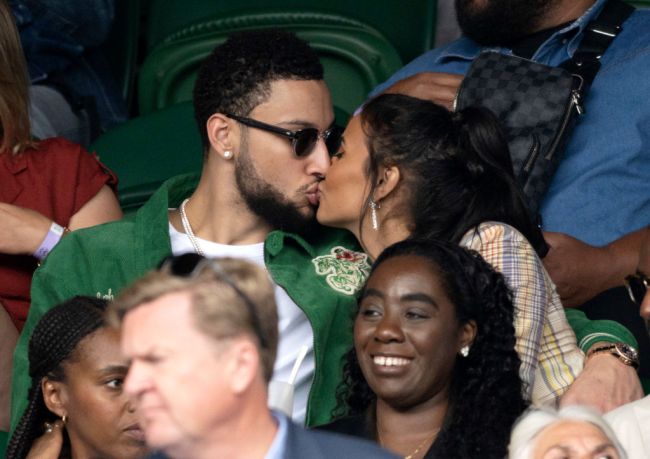 Ben Simmons’ shot on the court might be broken but off the court, he’s one of the best at shooting his shot.

Just last week it was reported that Simmons, who struggled with his shooting throughout the playoffs, was sitting out the Olympics because he planned on getting in the gym to focus on his “skill development.”

The Philadelphia 76ers’ Ben Simmons has informed the Australian Olympic basketball team that he will not participate in the Tokyo Games.

Coach Brian Goorjian said in a statement that he and Team Australia “understand and support his decision.”

“The best thing for everybody right now is for him to go on and develop that skill package and improve in a couple of areas for his next season in the NBA, but the Boomers are always here for him. We wanted him to know that in his time of need, the culture and the guys here are behind him and support him,” Goorjian said.

Sources had told ESPN’s Brian Windhorst last week that Simmons was doubtful to play in the Olympics because he planned to focus on skill development. The Australians are medal contenders who are scheduled to begin training this week in Los Angeles and play Team USA in two exhibition games next month in Las Vegas.

Apparently, Simmons hasn’t been seen inside a gym after the Sixers were eliminated from the playoff but he has been seen hanging out with British TV host Maya Jama at Wimbledon.

New couple alert 🚨 Maya Jama and her new beau, Basketball player, Ben Simmons debut their relationship at Wimbeldon 😍 how cute are they!? pic.twitter.com/VVA00SICZ5

NBA fans had some pretty interesting reactions to Simmons hanging out with Jama instead of working on his game.

If Simmons put the effort he does on women into basketball Embiid would possibly be in a finals rn https://t.co/OYu8guOgtn

Shooting shots across the Atlantic but not under the rim😔😔😔 https://t.co/Bl5j5ko8n9

@BenSimmons25 you should not be allowed to do anything but practice basketball after this years playoffs https://t.co/d63RF80RjE

Man a shooter everywhere but a basketball court https://t.co/oG6qoh88as pic.twitter.com/cgMdB4rrMn

ben simmons on the court vs with women https://t.co/pZkytiDSNR pic.twitter.com/jNdt1yUce1

Ben Simmons couldn’t hit a 3 so decided to hit a 10 instead https://t.co/P3IgYFrCWU

This sure looks like Ben is “taking the off season to work on his game”… 👀 @sixers https://t.co/RBMUSX9Ghz

Lol nah he said he was skipping the Olympic training camp bc he’s “working on his skills”. https://t.co/9eyku6IuYh

Focusing on "individual skill development" my ass send him to Sacramento https://t.co/uLXcScOmIZ

Why would he work on his game when this is his life???? Maya Jama https://t.co/g0yRD1eb1O