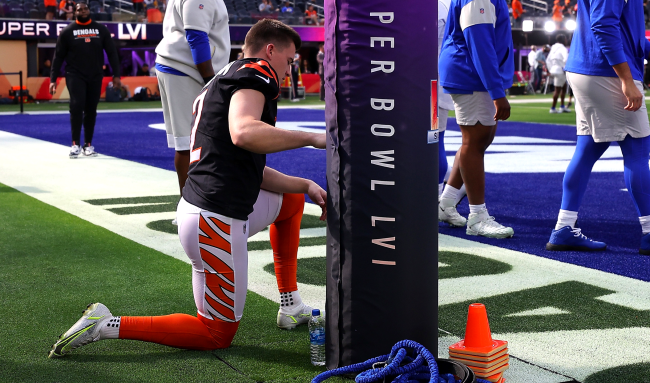 Cincinnati Bengals rookie Evan McPherson certainly didn’t lack for confidence last season. As far as kickers go, he might be the one milking his “brand” more than any other. (Which, let’s be honest, doesn’t take much.)

After going 28-for-33 on field goal attempts in the regular season, then making all of his kicks in the postseason (and calling his shot before a AFC Divisional game-winner), Evan McPherson has been on a roll.

The 22-year-old out of the University of Florida has even gone so far as to file for a trademark on the nickname “Money Mac.” And that was before he also kicked the game winner in the AFC Championship Game.

So McPherson was obviously feeling himself at Super Bowl LVI when he decided that with his team down 13 to 10 at the half he would not be in the locker room with his teammates, but instead would stay on the sidelines to watch the halftime show starring Snoop Dogg, Dr. Dre, 50 Cent, Mary J. Blige, Kendrick Lamar and Eminem.

#Bengals rookie Kicker Evan McPherson watched the halftime show instead of going to the locker room and loved every second 🔥🔥 pic.twitter.com/qrk4wW808O

Many NFL fans, myself included, just assumed that since Evan McPherson is just a kicker and had no real adjustments to make at halftime that he had permission from the Bengals to be out on the field for the show. We would be wrong.

According to Bengals special teams coach Darrin Simmons, who spoke to The Athletic about it, McPherson not joining the rest of the team at halftime of the Super Bowl is a problem.

When asked about it, Simmons reply was short and to the point.

Interestingly, it turns out that McPherson wasn’t the only Bengals to stick around for the halftime show. Long snapper Clark Harris also stayed out. He was just savvy enough to not get caught by the cameras.

Evan McPherson had the best seat in the house for the halftime show 😂 pic.twitter.com/BkNVkmCZjE

Simmons also, in typical coach fashion, says that despite setting a record with 16 postseason field goals and nailing five game-winners during the season, McPherson still has work to do and “kick better than he has.”

“Not that it’s poor, but I think for him to be elite and go over the top, he’s got to kick better in practice and learn new things,” he said.