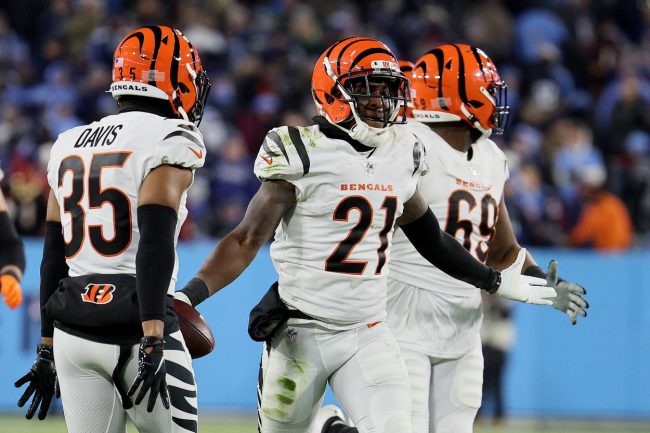 Saturday’s AFC Divisional Round between the Titans and Bengals did not go well for Ryan Tannehill. The Tennessee quarterback threw three interceptions during the loss to Cincinnati and a new mic’d up video adds salt to the wound.

The game began with Tannehill throwing an interception on the very first play of the game, but he stayed clean through the rest of the first half. On the first drive of the second half, the Titans drove 66 yards on four plays to set up 1st-and-goal at the nine-yard-line.

Tannehill dropped back in the pocket, looked his receiver the whole way and threw it in his direction. The screen was intended for Chester Rogers but it ended up in the hands of Bengals defensive back Mike Hilton, who does not get enough respect for being as good as he is.

It was a tremendously athletic interception.

Before the play, a mic’d up video showed that Hilton knew what was coming. Likely from his film study, the former Ole Miss cornerback was prepared for Tannehill to throw the ball and was ready to pounce when the opportunity came.

In the mic’d up video, Hilton called his shot, saying that he knew what was coming and that he was going to pick the ball off. And then he did exactly that.

"I'm really the best in the league."

The video doesn’t suggest that Hilton knew the exact play call or that he saw the Titans run that screen before. He just was in the right place at the right time, because he knew where to be when.

Hilton, who was coming off of the edge, read Tannehill’s eyes and body to know that the pass was coming. When he recognized what was happening, he backed off his pass rush, deflected the ball to himself in the air and came down with a game-changing pick.

Tannehill, and the Titans’ offense and offensive play-callers, should be embarrassed. Hilton spoke his play into existence and knew what was coming before it happened. Oof.