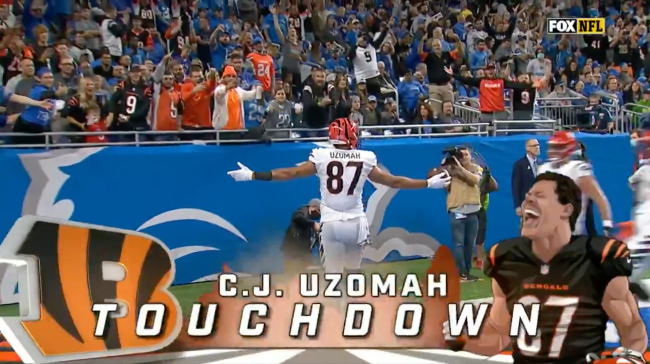 During Sunday’s win over the Lions, a few Bengals players accidentally destroyed a fan’s phone. Those players are now trying to make it right and hooking him up with a new phone and some tickets.

Already holding a 20-0 lead, Cincinnati found itself inside the 5-yard-line with just under 13 minutes remaining. In an effort to put the game away, Joe Burrow  faked the play-action handoff on 3rd-and-goal and looked to his right.

With nowhere to go, the second-year quarterback dropped back in the pocket, turned to his left and connected with tight end C.J. Uzomah for six. Uzomah got up and walked over to the stands to celebrate.

He found a smattering of Bengals fans in the crowd and went to give them high-fives. As he did, he accidentally knocked Sebastian Day’s phone from his hand.

Well, shortly after the phone hit the turf, running back Joe Mixon swooped in to save the day.

He scooped up the phone, but the damage had already been done. The phone had hairline cracks all over the screen.

However, despite the cracks, the phone still works. Thank goodness it does, because Day was recording the whole thing and it made for one of, if not the best moments of the NFL weekend.

Here is the video:

Uzomah and Mixon both found the video and weighed in on Twitter:

Aye We Lit 4 this one🤣🎥 @cj_uzomah damn bro you owe my guy a new phone🤣🤦🏽‍♂️ https://t.co/HyhhbSZpLD

Yea we need to get @SebastianDay23 better quality videos when we score from here on. I got you https://t.co/TG7LCY4vUu

Day told Cincinnati’s local Fox station that Uzomah reached out to him and offered to buy him “the newest smartphone on the market.” He joked that he would rather have tickets to a game than a phone.

His phone's a little beat up, but he'll never forget the day the #Bengals beat the Lions.

The story of a #Bengals fan's fumbled phone, a viral celebration and a direct message. @SebastianDay23 pic.twitter.com/qMVpH3oiGC

As it would turn out, Uzomah, who signed a three year, $18.3 million contract with the Bengals on March 12, 2019, has the money for both. The 28-year-old tight end is hooking Day up with a new phone and tickets to either the Steelers or Browns game.