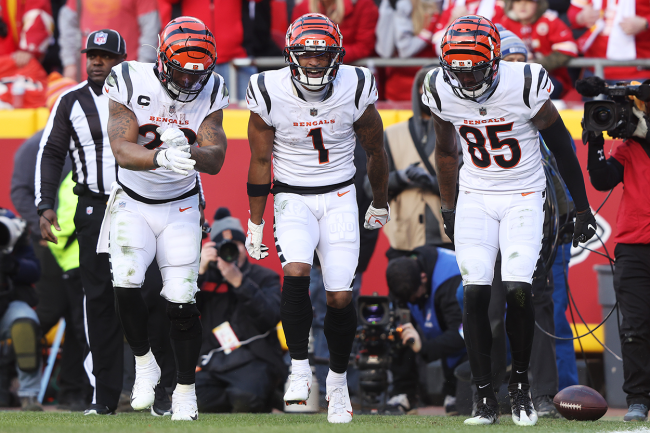 The Bengals are set to play in their first Super Bowl since 1988. However, if things were to have played out differently, Cincinnati may have had a shot to make the NBA finals.

Joe Burrow, Tee Higgins, Ja’Marr Chase, Joe Mixon and Jessie Bates could make for a nice starting five on the hardwood. Old video from each of their high school days has gone viral and all five guys were very impressive.

Burrow started for Athens High School’s basketball team as a freshman. He scored 1,426 career points (second-best in program history) and averaged 20 points per game as a senior. As a result, he was an all-state selection.

Higgins was ranked the 18th-best player in the Class of 2017 for basketball. He was so good that he was a finalist for Tennessee’s Mr. Basketball award.

Chase’s first love was basketball. He could have very easily gone on to play in college.

Mixon averaged 12.2 points per game in high school. He put his focus on football, but if he had flipped the script, he could have been a real problem for opposing defenses.

Bates, who is now a safety for Cincinnati, was an absolute shooter in high school. He wasn’t a big star like some of his teammates, but he could light it up if you gave him an open look.

Here is a compilation of the Bengals’ hypothetical starting five hooping in high school:

okayyyy they can hoop too 👀🏀🔥

It just goes to show that you can teach a sport, but you can’t teach athleticism.