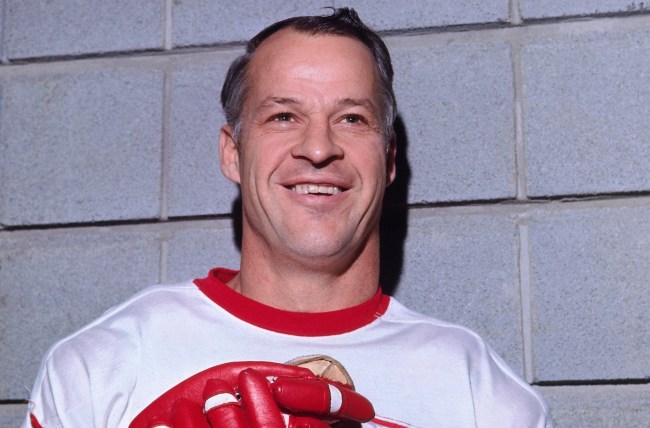 Before there was Wayne Gretzky, Mario Lemieux, or even Bobby Orr, there was Gordie Howe.

Howe—or “Mr. Hockey,” as he was known—had a legendary professional career spanning from 1946 to 1980. That’s 34 years! During that span, he won four Stanley Cups with the Detroit Red Wings, six Hart Memorial Trophies as the NHL’s most valuable player, and six Art Ross Trophies as the league’s highest scorer.

He also holds the league record for games played with 1,767 (he played another 419 in the WHA just for good measure) and is fourth all-time in scoring with 1,850 points.

Is that good? I think that’s pretty good.

Wednesday marks the fourth year anniversary of Howe’s death at 88 years old and it’s safe to say he left one hell of a legacy behind when he passed away. What sticks out most to me is how universally well-liked and respected he was, both for his immense skill and being a great guy off the ice.

As a result, I did a little digging to find some examples that highlight why Howe is the legend that he is and found six in particular that stood out.

Rookies in all sports put up with a good amount of torture at the hands of their veteran counterparts. Wayne Gretzky is no exception, as he too had to endure some abuse as a young player before becoming one of hockey’s all-time greats.

He first played against Howe (who was his idol growing up) as a 17-year-old member of the WHA’s Indianapolis Racers during the 1978-79 season, a contest Gretzky recalls fondly thanks to the way Howe welcomed him to the big time:

“Third or fourth shift in the game, I took the puck from him, and before I knew it this big stick was pounding me on the hand. I thought I’d broken my thumb. He took the puck and said, ‘Don’t ever take the puck from me,’ and I said, ‘OK.'”

Howe appeared in a SportsCenter commercial in 1996, where he proceeded to give anchor Keith Olbermann a solid beating that was capped off by a stick to the groin. Howe went as easy as he possibly could but he apparently still managed to pack some wallop, as Olbermann recalls thinking, “I had just gotten my butt kicked by a 68-year-old man who wasn’t really trying.”

At least that man was Gordie Howe, which makes for a much cooler story when you tell someone about the time someone on the edge of 70 bodied you.

Yes, you read that correctly.

After his gear was misplaced before a game, Howe had to scramble for extra equipment so he could play. The one thing he couldn’t find or borrow? A jockstrap. Wanting to protect his family jewels, Howe grabbed the ashtray from the locker room, stuffed it in his underwear, and was good to go.

Cigs in the locker room and having your gear get left behind on the train is peak old-time hockey. No private jets back in those days, fellas.

Holding a Grudge for Eight Years

Howe was usually the one delivering hits as opposed to taking them, but in 1960, Bobby Baun of the Toronto Maple Leafs laid a hard one on Gordie. That was a mistake, Bobby.

As the story goes, Baun was playing for the Oakland Seals seven or eight years later and tried to hit Howe again. However, he saw him coming, dodged the hit, and proceeded to cross-check Baun in the neck. “Now we are even, you son of a bitch,” said Howe. Baun recalled not being able to breathe for two minutes, and while I don’t know for sure, I’m assuming that was the last time he fucked with Gordie.

I’ve heard several stories about Howe’s ability to play both left and right-handed. Apparently, during a Red Wings tryout, he showcased this skill to then coach-GM Jack Adams—a talent that is mentioned in his Hockey Hall of Fame bio, which I have little reason to doubt the veracity of:

“The ambidextrous Howe drew Adams’ attention from the start with a sizzling rush down the left-wing and a sharp shot. The next minute he escaped down the right-wing, switched his stick to the other side, and still with a forehand zipped another shot at the goal.”

This is actually mind-blowing to me. I can’t even write my name left-handed and Gordie Howe was out there scoring goals in professional hockey with both hands. This is just another reminder that despite the tough-guy persona he had on the ice, Howe was also immensely skilled.

Longtime NHL executive Brian Burke won the Stanley Cup in 2007 as the GM of the Anaheim Ducks. He held a party with the Cup in Vancouver, and Howe happened to be there on business, a development Burke recalled reacting to with a “Holy christ!”

Howe made sure his presence was welcome, and as a testament to the respect people had for Howe, Burke assured him it was, saying, “Mr. Howe, you’re welcome anywhere in the hockey world at any time.” The two men started talking shop before Burke’s wife reminded him he had 200 other guests to attend to, to which he responded, “I’m talking to Gordie Howe. They can all wait.”