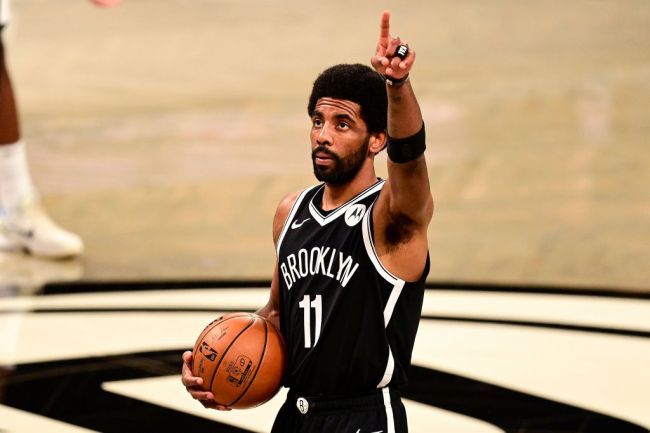 Have you ever coasted on a group project and the day of the presentation, the one girl worth a damn bangs out sick, and you’re forced to give an analysis on the themes of Catcher In The Rye by only reading the back cover?

That was the essence of Kyrie Irving’s first extensive explanation for his decision to resist the vaccine, days after the Brooklyn Nets announced Kyrie will not play or practice with the team until he is eligible to be a full participant: “Each member of our organization must pull in the same direction,” the Nets statement read in part.

In an Instagram Live to nearly 100,000 confused viewers, Kyrie, featured in the foreground of a stacked bookshelf, reiterated his refusal to get vaccinated on the grounds of “rocking with all those who have lost their jobs to this mandate.”

A few things to note from the meandering soliloquy.

“It’s reality that in order to be in New York City and on a team, I have to be vaccinated,” Irving said. “I choose to be unvaccinated and that’s my choice.”

Kyrie doesn’t care what you think.

“I am doing what’s best for me. I know the consequences here and if it means that I’m judged and demonized for that, that’s just what it is,” Irving said. “That’s the role I play, but I never wanted to give up my passion, my love, my dream just over this mandate.”

Mandates, not COVID, is the real malady.

Kyrie is not retiring.

“No, I’m not retiring and no I’m not going and leaving this game like this,” Irving said. “There’s still so much more work to do and there still so many other (youngsters) to inspire, because I know they want to be better than me.”

Kyrie explaining why he hasn’t gotten vaccinated yet pic.twitter.com/EmHOUPdcoj

Kyrie Irving is refusing to get vaccinated.

Muhammad Ali did a TV commercial urging parents to vaccinate their kids.

Kyrie said he stands with the vaccinated and the unvaccinated, no more division we have to come together.

That literally means nothing.

Now if you’ll excuse me, I gotta slide in Kyrie’s DMs to try to recruit him for my men’s league hoops team. His title dreams don’t have to die here.