Brooklyn Backs Kyrie Irving Into Corner With Bombshell Announcement: ‘Each Member Of Our Organization Must Pull In The Same Direction’ 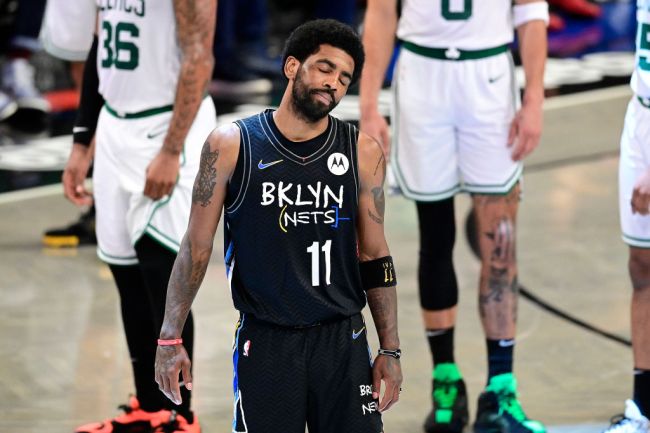 Hours after it was revealed that Kevin Durant, James Harden, Nets owner Joe Tsai and GM Sean Marks will all be involved in deciding whether or not Kyrie Irving can be a part-time player this season, it appears a decision has been made.

Something has to give.

Kyrie Irving will not play or practice with the team until he is a full participant, according to Shams Charania.

Nets GM Sean Marks released a statement on his decision to bench Kyrie entirely until he meets the NYC vaccination mandate.

“Given the evolving nature of the situation and after thorough deliberation, we have decided that Kyrie Irving will not play or practice with the team until he is eligible to be a full participant. Kyrie has made a personal choice, and we respect his individual right to choose. Currently, the choice restricts his ability to be a full-time member of the team, and we will not permit any member of our team to participate with part-time availability. It is imperative that we continue to build chemistry as a team and remain true to our long-established values of togetherness and sacrifice. Our championship goals for the season have not changed, and to achieve these goals each member of our organization must pull in the same direction. We are excited for the start of the season and look forward to a successful campaign that will make the borough of Brooklyn proud.”

The chess piece has been moved.

Unless the city of New York changes its vaccination mandate (highly unlikely), Kyrie has two options:

Kyrie Irving: "I have no plans on getting the vaccine but I'm still interested in being a part-time player."

“You want him out too, right?” pic.twitter.com/9fmn5mMObm

Finally some balls in the organization

So he’s about to retire

This is going to get very interesting.