These Are The Best Reactions To The Cheez-It Bowl, The Worst Best Game In The History Of College Football 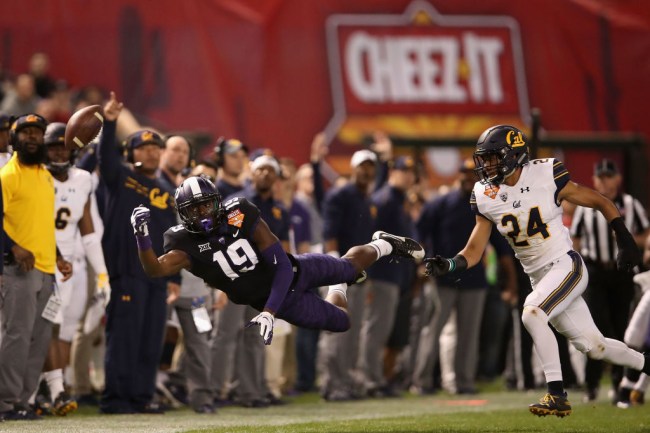 For those of you who tuned into the Cheez-It Bowl on Wednesday night, I send my condolences. Actually, never mind. That game was so bad, so unforgivably sloppy, it was actually one of the most entertaining steaming piles of dung I’ve seen in quite some time. The TCU Horned Frogs defeated the California Golden Bears 10-7 in an overtime game that was so fucking dumb, it was brilliant.

The game featured nine combined interceptions, tied for third in NCAA history and the most of any game this entire season. I guess that’s to be expected when you match up two top 30 defenses against two of the worst offenses in the Power Five.

Wow, surprised they updated this already but it feels right. #CheezItBowl pic.twitter.com/YPqA63tXyH

Some other wild stats:

• 3 INTs by Cal's Jaylinn Hawkins, which is more than any TCU WR had receptions

The game also featured one of the worst trick plays ever conjured up.

Look at this stat line by TCU quarterback Grayson Muehlstein. This is not a typo.

At one point in the game, the fifth-year senior had a NEGATIVE quarterback rating. Mind you, TCU won this fucking game.

TCU had to bring in fourth-string quarterback Justin Rogers, who has drop foot in his plant foot from a serious knee injury.

The incompetence even bled into the sidelines.

Watch dude in the suit near the sideline 😂😂😂 pic.twitter.com/apflTlhojG

The game was so outrageous that Buffalo Wild Wings, which was the bowl’s sponsor from 2012-13 before it became the Cactus Bowl then the Cheez-It Bowl, was like ‘fuck this game.’

Cal-TCU is headed to overtime, and we’ve never owed you a bigger apology.

Here are some other funny reactions to the dumpster fire.

I had a really good #CheezItBowl tweet, but it was intercepted.

This Cheez-It Bowl is so bad, I feel like I'd be missing some kind of history if I turned it off. #CalvsTCU #CheezItBowl

Where were you when the worst best game in college football occurred? Etch this one in the history books.