First Look At The Best Super Bowl Commercials Of 2021 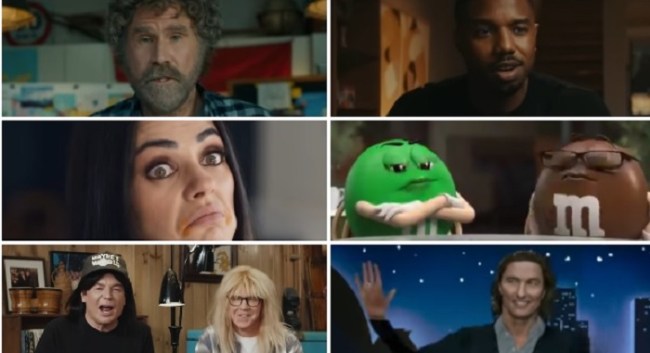 A flat two-dimensional Matthew McConaughey struggles with everyday life until he has himself some Doritos 3D Crunch.

GM’s big game commercial features Will Ferrell who learns that Norway outpaces the United States in electric vehicle adoption by a wide margin. Hilarity ensues as Ferrell is joined by Kenan Thompson and Awkwafina who make their way to Norway to send a message to Norwegians.

Tide’s Super Bowl commercial features a teenager who wears a “Jason Alexander hoodie” that gets used during some messy tasks while the theme from “The Greatest American Hero”, which was once sung by Alexander’s George Costanza character during an iconic episode of “Seinfeld, plays in the background.

For their campaign during the Super Bowl, Corona and Tony Romo issued a search for a one-day “Romo Replacement” to man the Corona Hotline while Romo is busy calling the big game for CBS on Sunday. Romo asked football fans 21 and over to post their audition videos via Twitter/Instagram/Facebook by using #RomoReplacement which led to Snoop Dogg joining in on the fun and auditioning to replace Romo with the Corona: Snoopline

Dr. Squatch: You’re not a dish, you’re a man

Dr. Squatch makes its pitch as the all-natural soap for men.

Bud Light brings back several Bud Light commercial legends including Grammy-nominated artist Post Malone, Cedric the Entertainer, the Bud Knight, the Dilly Dilly guy, and more, as they all come together to save Bud Light.

Cheetos: It Wasn’t me

Shaggy sings his 2000 hit “It Wasn’t Me.” to defend Mila Kunis who is being accused by her husband Ashton Kutcher of steeling his Cheetos Crunch Pop Mix.

The famous Boston Brewery is taking advantage of Budweiser sitting out the Super Bowl for the first time in 37 years by mocking Bud’s iconic Clydesdale horses to promote their Wicked Hazy IPA.

In the commercial, Sam Adams’ new pitchman, “Your Cousin from Boston”, unhitches the Clydesdales from their wagon and causes mayhem in the streets.

To promote Bud Light Seltzer Lemonade, Anheuser-Busch takes a lighthearted look back at the past year and hilariously explained how they concocted the new drink out of the “lemons” of 2020.

2020 was a lemon of a year, so we made Bud Light Seltzer Lemonade…. and we’re bringing it to you for Super Bowl LV!

Reply with a 🍋 and use #LemonsIntoLemonade and #Sweepstakes for a chance to win a 12-pack on us. pic.twitter.com/8rML8Ar7hf

Rockstar Energy makes its Super Bowl debut with an ad featuring Grammy-nominated rapper Lil Baby talking about how “the spotlight catches those around him who also are on their path to stardom.”

Mike Myers and Dana Carvey reprise their roles as Wayne and Garth of Wayne’s World for an Uber Eats’ ad featuring Cardi B to promote their #EatLocal campaign.

Wayne’s World is back with a very important message (and special guest):

Be excellent and #EatLocal. pic.twitter.com/DglNcxFqH0

Michelob Ultra: Happy enlisted some of sports top superstars including Serena Williams, Anthony Davis, Peyton Manning, Brooks Koepka, Jimmy Butler and Alex Morgan to showcase “the less-heralded-but-equally-important parts of their lives that ultimately play a role in their success.”

M&M’s ad features Dan Levy of Schitt’s Creek and displays a variety of “wow, I really shouldn’t have done that” scenarios with people trying to smooth things over with a bag of M&M’S.

This year’s #SuperBowlLV commercial proves M&M’S can make almost any situation better… except, of course, when @danjlevy eats your friends.#MMSTogether pic.twitter.com/Nvxdqyq17s

Mountain Dew is running a contest for their Super Bowl Major Melon commercial. The company says it will give away the $1 million cash prize to whichever viewer can guess how many bottles are shown during the commercial, using the hashtag #MTNDEWMAJORMELON on Twitter.

Rescuers get themselves distracted by stacking Pringles chips and forget to save stranded astronauts.

Lenny Kravitz lets us know we’re all billionaires because we were all born with 2.5 billion heartbeats. I’m sure his ad will reasonate with the people over at r/Wallstreetbets.

Vroom hilariously depicts the torture it is to go through the car buying process.

This ad will not air on Sunday.

Timothée Chalamet stars as Edgar, the son of Edward Scissorhands, who has issues with driving cars until he’s able to drive the All-Electric Cadillac LYRIQ with hands-free driving.