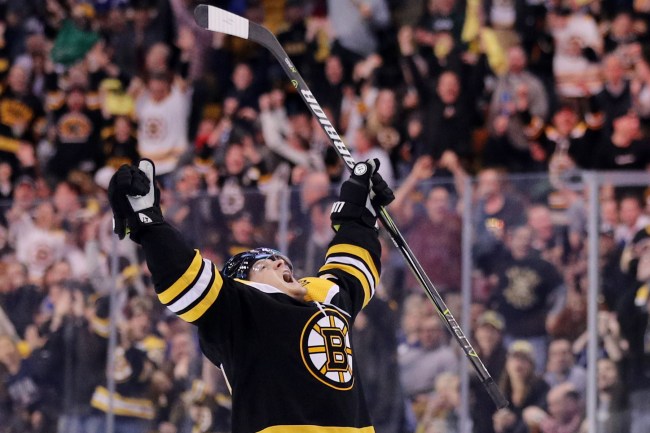 Now that is what’s called coming out of the gates swinging!

But seriously, I enjoy watching sports and watch them whenever I can, which I will admit is not as frequently now than say, ten years ago. Having kids will do that to you, I guess.

My favorite sport to watch is probably football followed closely by basketball—specifically playoff basketball (I have a hard time watching mid-season games, especially when it sometimes feels as if the players are trying as hard as I am).

I also love watching soccer but I’m not going to front and say I watch it on a regular basis. I typically watch the World Cup, get really into the World Cup, and as the World Cup is ending, pledge to continue to watch soccer after the tournament ends.

That lasts for about a week tops and then transitions into almost exclusively catching soccer highlights on Twitter. I did watch the Champions League Final a few weeks ago for whatever that’s worth.

I was going for Tottenham because it seemed like they had a lot of dudes on their team that were also on England’s squad during last summer’s World Cup and based on the quiz I took leading up to it, England was the team I was rooting for after the United States shit the bed in qualifiers.

My relationship with hockey feels pretty similar to the one I have with soccer: I enjoy hockey but I don’t actively watch hockey. I like the playoffs and will tune in when the Olympics roll around but that’s about the extent of it.

When I was living in Maine after college, I had friends who loved hockey, and seeing as how there’s not a lot to do on weeknights in the dead of winter up in that corner of the country, I found myself watching and drinking beers with them. But even then, I was just along for the ride. And the beers.

I love Boston sports, so by default, my hockey team of choice is the Bruins. It’s been fun for me with the Bruins in the Stanley Cup Finals, because unlike the past couple years where I’ve casually watched the championship round, I have a semi-rooting interest after hopping on the bandwagon as my level of interest grows with each game. 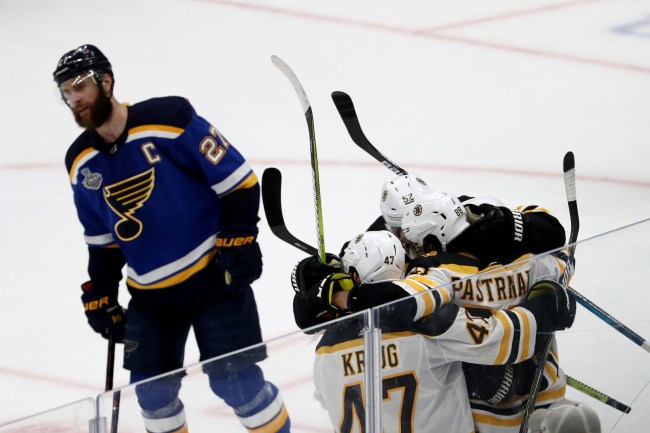 This is easily the most hockey I’ve ever watched in such a short period of time (I even read an article about hockey a few days ago). When I tell you that I’m all in, I mean it. Granted, I could only name two or three players on the Bruins, but for all intents and purposes, I’ve become a hockey fan.

As a fresh-faced hockey fan, I’ve found myself falling in love with certain parts of the game. Here are a few of the things that I’ve discovered that I really love about the sport.

My dudes, power plays are fucking madness. They really are.

If your team is on a power play, then it’s all systems go. How many shots can we get off in two minutes? It has to be at least five, right? Can we get six or seven? Oh shit, they cleared it! Hurry, let’s get another shot off!

When your team’s on a power play, it’s like when you had a substitute teacher back in the day. How much stuff can we get away with before our real teacher comes back?

On the flip side, when the other team is on a power play…

It must be what watching a dam with a crack in it feels like. You’re just hoping the old thing holds.

Also, If a team has more than one guy in the penalty box, it should definitely be called something besides a” 5-on-3″—like the SUPER Power Play.

We could also try the Five Finger Death Punch Power Play but there’s a chance the NHL would get sued by the band. Maybe they can sign off on it? Let’s make this happen.

The Goal Horn is Both Helpful and Fantastic

Am I showing off how green I am here? Probably, and hardened hockey fans most likely read that last sentence and chuckled at my foolishness.

But whatever, nine times out of ten, I don’t see the puck go in right away and need the visual cue of the team that scored celebrating to really know what’s up. Lay off; I said I was new to this.

I really know a goal has been scored because then the goal horn goes off and I love me some goal horns. Goal horns sound like what you’d hear moments before a giant tanker emerges from a pea soup fog and you’re sitting in a kayak directly in its path, helpless to avoid getting run over.

I wish I had a goal horn for my everyday life, something I could play for what normcore wins I achieve throughout the day.

Made it through a trip to the grocery store and managed to find all the random vegetables my wife had on the list? Goal horn.

Got my daughter dressed in clothes that at least appear to match? Goal horn.

Didn’t run into my boss in the men’s room? Goal horn.

I’m going to go on Shark Tank and pitch this.

Did you know that each team has its own version of a goal horn? Yeah, it’s true.

If you’re curious, my goal celebration would be the horn followed by the intro of “Hook, Line & Sinker” by Royal Blood. Now all I have to do is figure out how to buy a hockey team and make my dreams a reality.

This is not news. I think that it is generally taken as fact that hockey players are certifiably insane. If you were ranking what sport had the craziest athletes in it, hockey players would definitely be close to the top, if not at the top of the list.

With that said, you can’t sleep on matadors in bullfighting. They fight bulls. That’s absurd. Bull riders would be up there too. After all, fighting and/or riding bulls are two things that probably should not be done by anyone, and if they are, should only be done by people referred to as “nut jobs” by their closest friends and family.

Anyway, in Game Four of the Finals, Zdeno Chara of the Bruins took a puck to the face from about five feet away.

Chara was down on the ice for about five seconds. Yes. Five seconds. Blood spilled from his mouth and he was clearly shaken up as HE SKATED OFF THE ICE ON HIS OWN.

If that was me, you’d have to have picked me up and carry me off the ice as I remained curled up in the fetal position questioning every choice I had made in my life that led me to that point. Would I be crying? OF COURSE I WOULD BE CRYING!!!

He was back in the locker room for a bit before eventually returning to the bench, unable to speak, but not unable to still support his teammates. It was later announced that he had suffered a broken jaw, which tracks because, you know, he took a puck to the face from point blank range.

Surely he was done for the series, right?

He was back on the ice for Game Five with a cage on his face, logging two shots on goal, and in Game Six, scored an empty net goal from his own end.

So in conclusion, hockey players are lunatics.

Turning the other cheek after a perceived slight is hard to do. One’s natural inclination is to fight back, but since the jump, we’ve been taught that the bigger man lets things go.

Case in point:  in Game One of the series, Torey Krug of the Bruins and David Perron of the Blues got into it down in front of the Bruins’ goal. And by “got into it,” I mean Perron basically tried to choke Krug with his stick as he took him to the ice then lorded over him like an asshole older brother.

Krug tried to get up, but Perron wasn’t having it. He continued to keep Krug down, knocking his helmet off in the process before the two finally came untangled. Perron then continued on like nothing had happened.

The best part is that amidst his revenge-seeking rage, Krug had the wherewithal not go straight for Perron, but for Robert Thomas, who had the puck.

A lesser man who was in Krug’s position would have likely headed straight for Perron when looking for revenge (and truth be told, no one would have blamed him if that’s what he had done).

Smart and infinitely vengeful? That’s my kind of player. 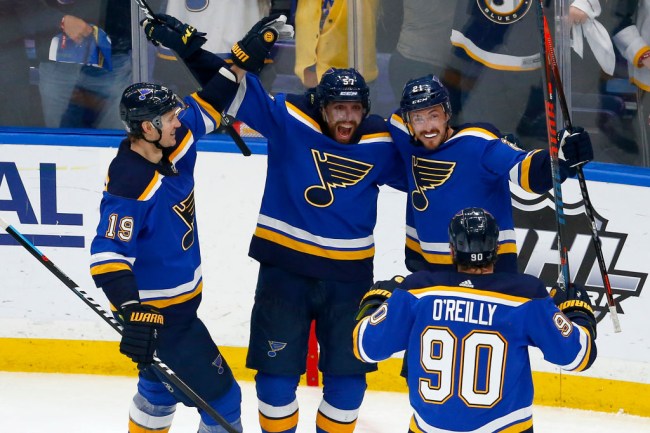 Here is a quick rundown of some other things I love about hockey.

This is Brad Marchand of the Bruins. 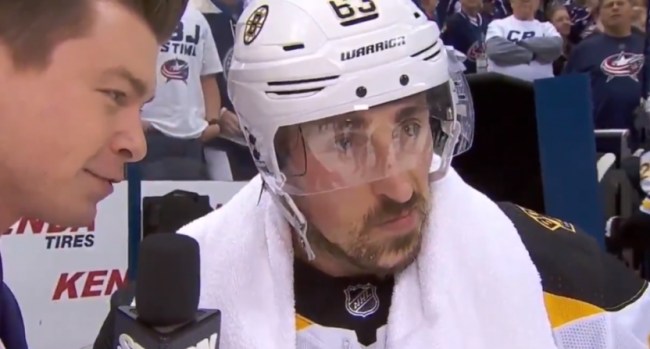 And this is Arthur Shelby, a character from Peaky Blinders: 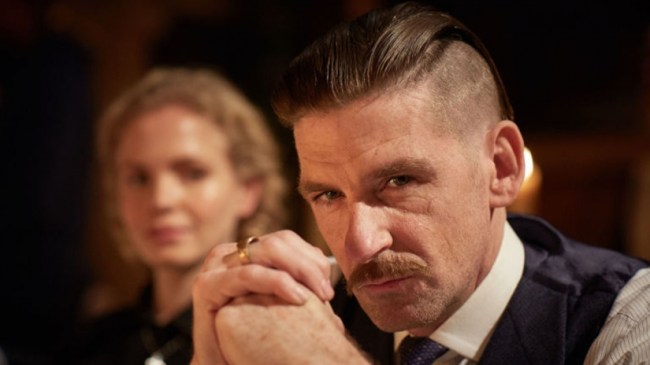 I’ve decided that based on what little I know about Marchand and his reputation, he is the Arthur Shelby of the Boston Bruins.

My only regret about watching hockey is that I didn’t start watching it sooner. With that said, Game Seven can’t come soon enough.