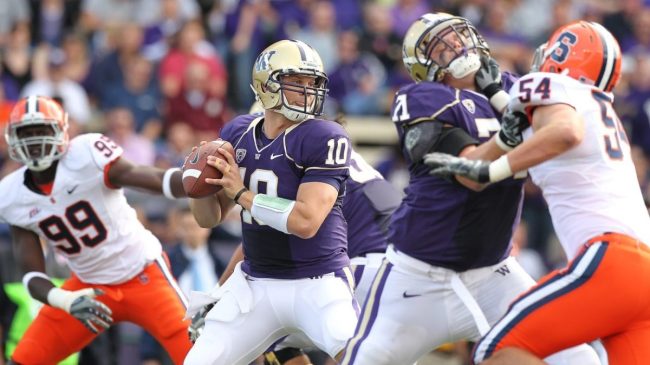 The Big Ten and conference commissioner Kevin Warren are doing everything in their power to become the predominant power in college football.

It began with the conference poaching West Coast powers USC and UCLA from the Pac-12. That move could reportedly cost the Pac-12 up to $200 million a year in television rights. The Big Ten then went out and signed a number of gargantuan TV deals of their. The conference agreed to deals with CBS, Fox and NBC that could total over $1.5 billion annually.

But Warren and the Big Ten weren’t done there. Instead, they continued to pick away at the Pac-12 and held talks with Pacific Northwest power Oregon. While no deal is complete, the latest reports suggest the Ducks have plenty of interest in coming onboard.

But they may not be coming along.

Brett McMurphy of the The Action Network reports the school met with Big Ten leaders this week to discuss a potential move to the conference.

Though according to McMurphy, the deal did not involve Warren or university president Ana Mari Cauce.

“These meetings did not involve university presidents or Big Ten commissioner Kevin Warren, sources said. The meetings were conducted with lawyers and consultants representing the schools and the Big Ten to determine the school’s compatibility with the league, sources said.

It is among the first steps a potential new member must take to join the Big Ten, a source said.”

The Big Ten sits at 16 teams following the additions of USC and UCLA. But they’re reportedly nowhere near done adding. A previous Action Network report stated the conference is pursuing Stanford and Cal in addition to the the Ducks, Huskies and Notre Dame.

The biggest fish in the pond is, by far, the Notre Dame fighting Irish. Though McMurphy reports that Irish athletic director Jack Swarbrick prefers to remain independent.

“For now, it appears Notre Dame prefers to remain an independent. Notre Dame athletic director Jack Swarbrick has continually said how much the Irish value their independence. Regardless of Notre Dame’s decision, the Big Ten still desires more Pac-12 schools, in part, to reduce potential travel concerns for USC and UCLA, sources said.

If those Pac-12 schools leave for the Big Ten, the Big 12 has targeted Arizona, Utah, Arizona State and Colorado as potential members, sources said.”

Whether that remains true with the type of financial figures being thrown around is yet to be seen. But one thing is clear, the Big Ten isn’t done big game hunting.