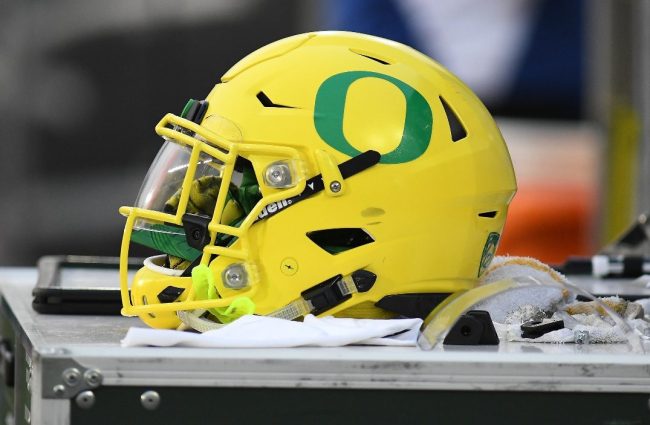 The college football landscape has become absolutely bonkers all thanks to these major conference realignments. UCLA and USC both left the Pac-12 for the Big Ten, which takes effect in the 2024 season.

Since then, other teams within the Pac-12 have been searching for a potential new home while the conference itself looks for a way to remain competitive. Either way, it sounds like the Oregon Ducks are looking to make a big move soon.

Brett McMurphy shared some of his insight on the situation, as the Ducks are in talks with the Big Ten about joining the conference. At first, it didn’t seem like something the Big Ten was interested in, as they initially shot down Oregon.

However, they’re apparently humming a different tune these days as talks are heating up between the school and the conference. Listen to McMurphey’s clip to get an inside scoop of what’s going on right now.

.@ActionNetworkHQ's @Brett_McMurphy stopped by @MacandCube to share his insight into Oregon's preliminary conversations with the Big Ten about joining the conference.

Moving out of the Pac-12 is likely the best thing for Oregon right now. After UCLA and USC left for the Big Ten, the conference has been searching for replacements. However, all of the schools looking to join the Pac-12 aren’t going to push the needle in keeping the conference competitive for the College Football Playoffs.

We’ll see how it plays out, but the Ducks are clearly looking to shake things up. Based on the popularity of the football program, Oregon should be able to find a new conference sooner, or later.