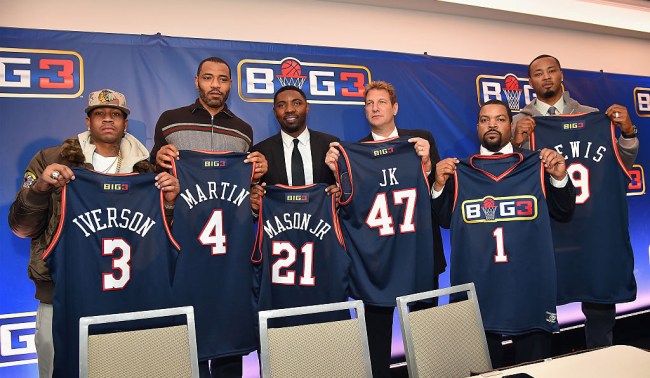 While most professional sports leagues are still too busy sucking up to Uncle Sam to even consider allowing players to use cannabis medicine as an alternative to prescription painkillers, the BIG3 — Ice Cube’s three-on-three hoops league – has become the first to flex some common sense on this issue. The summer basketball club is giving its players the freedom to use cannabidiol (CBD), the non-intoxicating component of marijuana, for “pain management and recovery.” This is the first time in history that a professional sports league in the United States of the Greedy has had the balls to risk sponsorship dollars for having any sort of association with pot. But for the BIG3, the move to legitimize CBD was a “no-brainer decision.” The health and well being of the players is what come first.

“The BIG3 is uniquely positioned in professional sports as a player-powered league that looks at our players as partners not property,” league co-founder Jeff Kwatinetz said in a news release. “As a testament to our relationship with our players, we listened to their feedback on CBD, as well as feedback from professionals in the regulatory and CBD industry, and decided to take this major step to support their health.”

Although CBD does not provide the stoned effects typically linked to marijuana, the federal government still considers it a Schedule I dangerous drug under the Controlled Substances Act. It is this classification that has prevented other sports leagues from allowing players to use any derivative of the cannabis plant for therapeutic purposes. But the power of CBD has been gaining traction in the United States for the past several years. This part of the plant has been shown effective in treating a variety of conditions from chronic pain to epilepsy. Still, even in states where the herb is legal for medicinal use, it has been off-limits to athletes at the college and pro level.

But change is underway.

The World Anti-Doping Agency (WADA) recently eliminated CBD from its list of prohibited substances. “Starting in 2018, cannabidiol (i.e. CBD oil) is no longer prohibited under the S8 Cannabinoids category,” the agency said in a press release. “Synthetic cannabidiol is not a cannabimimetic; however, cannabidiol extracted from cannabis plants may contain varying concentrations of THC, which remains a prohibited substance.” Basically, WADA determined that CBD wasn’t able to provide athletes with a competitive edge, nor would it put them at risk for turning into wild-eyed dope fiends.

This decision fell right in line with a last year’s report from the World Health Organization (WHO), which said CBD has a number of therapeutic benefits and should not be classified a Schedule I drug.

Last month, the organization took its stance on marijuana a step further, saying even full strength cannabis (with THC) was “a relatively safe drug” that brings about nothing more than “euphoria, laughter and talkativeness.”

But it was the U.S. Food and Drug Administration’s decision last week to put its seal of approval on the first ever cannabis-based medicine that could lead to the most significant change.

Although this development may not sound pertinent in the grand scheme of sports medicine, the move could actually end up making it easier for athletes to gain access to CBD. Because the FDA has determined that Epidiolex is “safe and effective” medicine, CBD can no longer reside in the Schedule I classification. A report from Business Insider indicates that the U.S. Drug Enforcement Administration has 90 days to put CBD in a less restrictive category – a move that could loosen things up a bit for this cannabis derivative.

“It absolutely has to become Schedule 2 or 3,” DEA spokesperson Barbara Carreno told the news source.

At bare minimum, the reschedule will open CBD up to more comprehensive research. Whether it will promote change in the anti-drug policies of professional sports remains to be seen. Right now, all of the leagues are being very cautious not to violate federal law. Still, there is hope that more leagues will eventually embrace this compound “over the powerfully addictive opioids and pain-relief drugs that are often the only other option.”

Former NBA star Al Harrington, who not only plays on the BIG3, but also owns a couple of cannabis businesses, told Cannabis Now magazine that current NBA players are always asking him for advice on using CBD. He says their main question is “Am I going to get in trouble for using it?”

“If I can get these guys to try it in the summertime, when they’re not on the clock, and if they see that it works, then they can start going to the NBA and saying, “Look, I tried this CBD cream. It really worked.” At the end of the day, the league has got to start taking notice,” Harrington said.