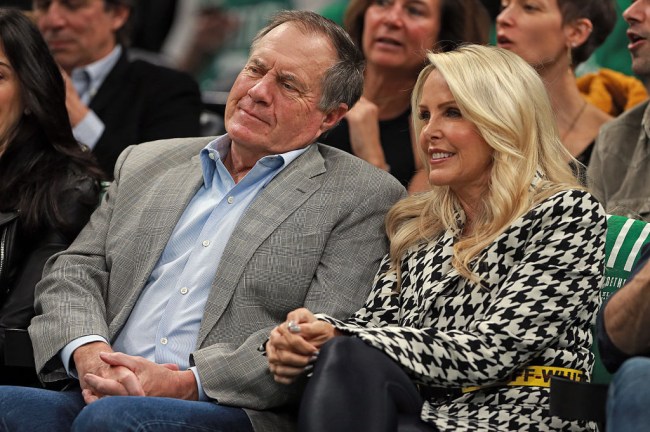 Bill Belichick’s dog ‘Nike’ made a surprise appearance during the 2020 NFL Draft and the story behind the viral moment involves both patience and treats.

Nike decided to jump into Belichick’s chair and join the broadcast just prior to the Patriots’ second-round pick creating quite the image as it was just him staring aimlessly at two laptops. Belichick, unsurprisingly, didn’t plan for Nike to make a cameo, instead, Nike made that call all on his own.

Belichick’s girlfriend, Linda Holliday, explained how it all unfolded on The Adam Schefter Podcast. Holliday explained that with Nantucket having strict rules about visitors and such coming to the island at the moment, she worked as Belichick’s IT person in charge of the lights and the tech side of things for the virtual draft.

She explained that she was busy adjusting a light while Belichick stepped away for a second, she then turned around and Nike was all of the sudden there, patiently eyeing down some treats.

“So I’m doing lighting, and next thing I know, Bill had a couple of treats that were left over near his laptop and he stepped away from the table,” Holliday explained. “And all of a sudden, he looks and goes, ‘Look at the table.’ There’s Nike just sitting there waiting patiently, and he knew his treats were there. So that’s what prompted him getting up to the table, and he was just waiting patiently for the word to take his treats.”

Talk about a good boy. Even while on national television, a chance to really make a name for himself, Nike still showed off his patience and skillset to sit back and wait for the go-ahead to grab the treats off of the table.

Holliday also explained that she, like 99% of all other pet owners these days, made an Instagram account for Nike, the 2-year-old Alaska Klee Kai. The account jumped from just 1,000 followers to over 16,200 followers after the viral moment.