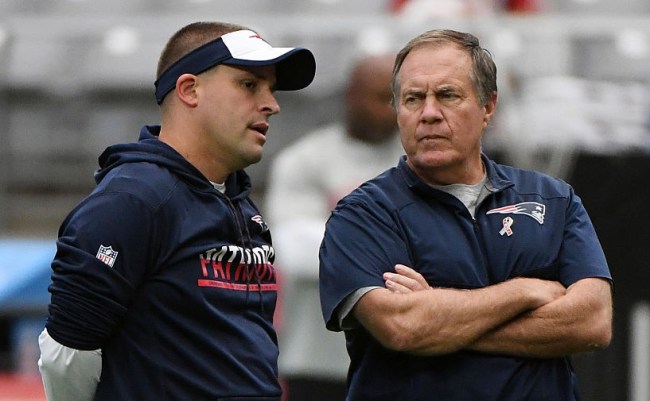 Back in February, it seemed like New England Patriots offensive coordinator Josh McDaniels was slated to head to Indianapolis to coach the Colts after the Pats had already lost defensive coordinator Matt Patricia following his attempt to do everything he could to help them lose Super Bowl LII. The Colts announced McDaniels’ upcoming arrival with a series of excited tweets but experienced what it was like to be a bride on a ruined wedding day when he took all of his rings with him and headed back to New England.

It was a shocking move that came with little explanation and reignited a rivalry that doesn’t actually exist. There was no concrete reason given for the sudden change of mind, but many people speculated Bill Belichick had used a fishing pole and dangled the head coaching position just out of the reach of McDaniels until the OC got the point.

Belichick spoke to reporters on Sunday and gave us a brief glimpse into the role he played in McDaniels’ decision, and while I’m sure you’ll be shocked to hear he didn’t share any major details, it appears the Jedi mind tricks he’s harnessed with varying degrees of success over the years paid off in this situation. He said the two had an in-depth discussion after the game— a dialogue that continued after returning from Minneapolis:

“We got back from Minnesota, I had an opportunity to talk to Josh, and we were able to work some things out. I’m thrilled he’s still with us and is going to continue in his role. I think he’s a top offensive coordinator in the league. He’s done a great job for me for a long time in a lot of different roles. I’m very glad, based on the meeting we had — there were a number of things that happened — that we were able to work that out and keep him with us.”

I like to think their chats contained at least one instance of Belichick waxing poetically about the time he resigned as the head coach of the New York Jets using a note on a napkin, but there are some things in life we’ll never be sure about.