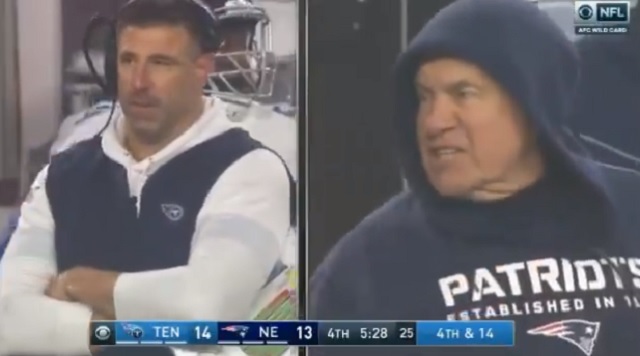 Earlier this season in a game against the Jets, Bill Belichick admitted that he intentionally took several delay of game penalties to eat up the clock.

Bill Belichick says he was just trying to “run a bit of time off the clock” late in the 4th quarter against the Jets when the camera cut to him smirking.

“It’s probably a loophole that’ll be closed and probably should be closed, but right now it’s open.” pic.twitter.com/S6mpX6Xb4L

Unfortunately for Belichick, Titans head coach Mike Vrabel used that same loophole against him in the fourth quarter of the Pats-Titans playoff game to kill a ton of clock and Belichick was not happy about it.

Bill Belichick “That’s fucking bullshit” after Mike Vrabel gives him a taste of his own medicine pic.twitter.com/HmB6pJ26j6

Vrabel using the move Belichick invented (stealing a minute off the clock with penalties before a punt outside of 5 minutes left) is an excellent additional story line in this game.

Vrabel pulled a Belichick and BB called it bullshit.

Mike Vrabel just did exactly what Belichick did against the Jets with the intentional penalty to run more clock. Wild. pic.twitter.com/zlsBgQEU9b

Mike Vrabel telling Belichick he has bigger balls by taking 3 delay of games to kill 2 minutes of clock. pic.twitter.com/DzQpVqQ5x1