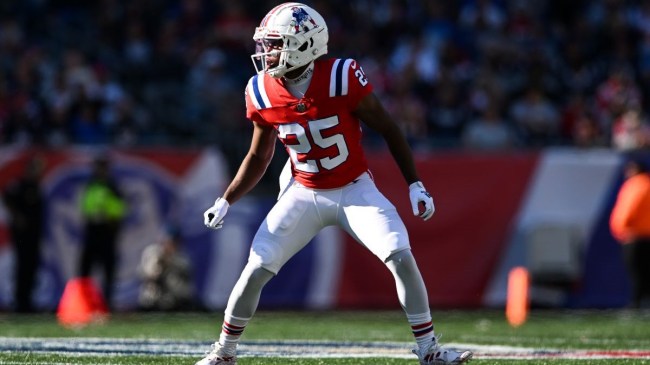 It’s been a rocky season for the New England Patriots. The Pats have dealt with on and off-field controversies as well as coaching turnover, and yet they still sit at 6-5, just one game out of an AFC Wild Card spot.

Much of the issues on the field have come on the offensive side of the ball. After making the Pro Bowl as a rookie a year ago, starting quarterback Mac Jones has struggled in 2022. Jones has thrown for just 1,768 yards, six touchdowns and seven interceptions in eight games played this year. He also dealt with a significant ankle sprain that cost him three weeks of action and led to brief quarterback controversy with rookie Bailey Zappe.

That appears to be settled now. Jones had his best game of the year in a 33-26 loss to the Minnesota Vikings on Thanksgiving. He completed 28-of-39 passes for 382 yards, two touchdowns and no interceptions. But even after that game, New England still ranks just 18th in the league in scoring at 21.7 points per game and 21st in total offense, with 325.9 yards per game.

And so, with a massive Thursday Night Football rivalry game on the books against the Buffalo Bills, legendary coach Bill Belichick opted to get creative.

Belichick is no stranger to getting the most out of every player on his roster. He famously moved starting wide receiver Troy Brown to cornerback in 2004 when the Patriots were short on options. He also turned linebacker Mike Vrabel into a stud tight end in goal-line packages.

So leave it to Belichick to get the most out of his roster when he needed it most.

With the Pats facing 2nd-and-5 at the Buffalo 48-yard line, rookie cornerback Marcus Jones checked into the game at wide receiver. It was his first offensive snap of the season. Moments later, he was flying down the sideline for a touchdown after catching a screen from Jones and toasting the Buffalo defense.

Jones played on both sides of the ball and was a return specialist in college at Houston. The 5-foot-8 slot corner reportedly runs a 4.38 40-yard dash and showed off every bit of that speed on the touchdown.

Leave it to Belichick to get the best out of what he’s got to work with.

Bill Belichick driving home from the team facilities at 3 AM on Tuesday after realizing he could unleash Marcus Jones on offensepic.twitter.com/zJSyPzsuo5

Bill Belichick bringing in their rookie defensive back, Marcus Jones to play wide receiver is exactly why Belichick is the 🐐 coach pic.twitter.com/nQpUmCKZGY

The Patriots’ offense may have just gotten a good bit more dangerous.