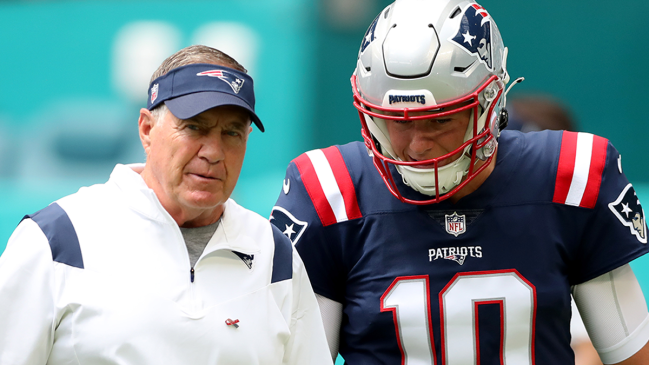 It’s safe to say the New England Patriots haven’t seen their season go to plan so far, as Bailey Zappe is currently serving as the team’s starting quarterback after Mac Jones was sidelined by an ankle sprain and Brian Hoyer was placed on injured reserve due to the concussion he suffered after stepping up to replace the second-year QB.

Zappe was more than able to hold his own against Aaron Rodgers and the Packers in a Week 4 game the Patriots ultimately lost by a score of 27-24, and he and the rest of the team were firing on all cylinders when they faced off against the Lions last week and walked away with a 29-0 victory that has seemingly led to some drama brewing under the surface in Foxborough.

Following the win, Bill Belichick declined to get into a discussion about the possibility of Zappe replacing a healthy Jones as the starter during a chat with WEEI. While you could argue he was simply trying to avoid tipping his hand on a sports radio program, the fact that he didn’t publically commit to reinstalling Jones in the pocket once he’s ready to play got plenty of people talking—including NFL insider Mike Florio.

The Pro Football Talk personality discussed the current situation in New England with Chris Simms earlier this week, and Florio channeled his inner Brian Windhorst while suggesting Belichick’s comments may be reflective of some behind-the-scenes tension.

Here’s what he had to say via Yahoo Sports:

“Let me be careful how I frame this because I don’t really have this nailed down yet, but I have reason to believe there’s something between Mac Jones and the coaching staff… I think Mac may be a little disconcerted with the quality of the coaching this year.

I have reason to believe there’s some quiet friction there that could boil over at some point.”

It’s worth noting this seems to be more speculation than anything supported by Florio’s sources within the organization, but it could certainly be worth keeping an eye on in the coming days and weeks.