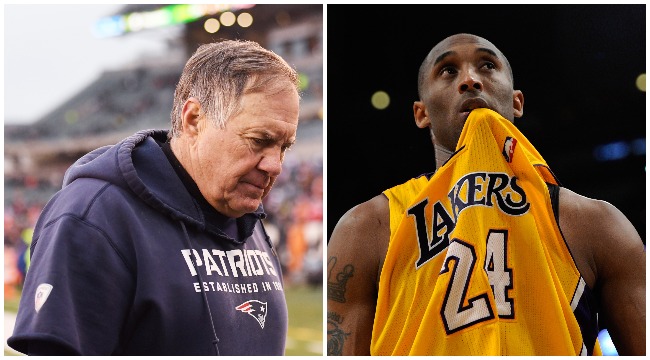 The last thing you can expect from Bill Belichick is a long, thoughtful response to, well, anything.

But the famously-terse Patriots head coach emerged from his comfort zone to issue a raw, heartfelt statement about the passing of Kobe Bryant, whose mentality and approach to his craft has been publicly commended by Belichick in the past.

Belichick issued the following statement that was made public by ESPN’s Field Yates.

This is an extremely sad time for the entire sports community.

In my 45 years in the NFL, I have never witnessed a group as captivated as the day Kobe addressed our team two years ago. The respect and reverence he commanded far exceeded him being a legendary player. He was a special person with an unmatched passion, intensity and mentality toward achieving his goals.

Kobe’s determination led to a brilliant athletic career and paved the way for successes in the next chapters of his life. By bringing joy to millions of people with his extraordinary athletic ability, inspiring people to elevate the standard for anything they do or performing countless acts of encouragement, Kobe Bryant’s lasting impact is immeasurable.

I hope our collective thoughts and prayers can help provide strength to the families of all the victims of this tragedy.

Kobe showed up to the Patriots OTAs in May of 2018 to address the team, much to the delight of everyone at Gillette Stadium.

At the time, Belichick praised Kobe’s character and mindset in a thoughtful way that is very un-Belichickian.

“I have a ton of respect for Kobe. Obviously a great player, had a great career. Spent the day with him yesterday. He had a lot of great observations and things we could learn from. He’s a tremendous guy.”