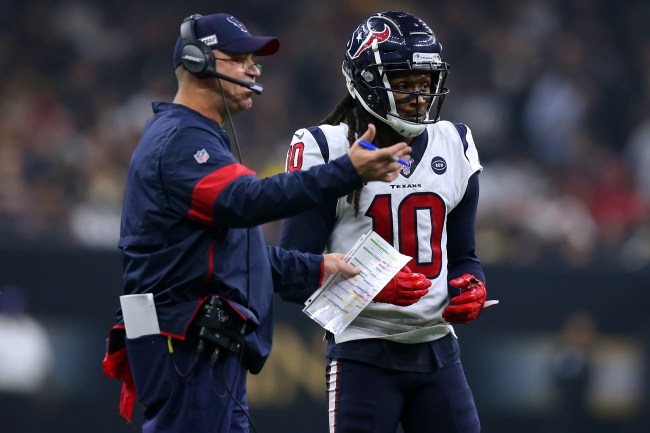 In the first day of NFL free agency the Houston Texans dropped a nuclear bomb on the sports world when they announced they were trading away Pro Bowl wide receiver DeAndre Hopkins to the Arizona Cardinals.

The #AZCardinals are receiving WR DeAndre Hopkins in the deal for David Johnson, source said. Bill O’Brien and his crew at it again.

Of course, the Internet was shocked to learn the Texans traded away one of the best wide receivers in football and crushed Bill O’Brien for it.

What in the f—k are the Texans doing?

Deshaun Watson seeing his No. 1 option get traded. pic.twitter.com/3eJgjvl7yC

What's next? Texans trade J.J. Watt for Mitch Trubisky and a deep-dish pizza?

bill obrien should be sent to federal prison https://t.co/I8XbmOD0nH

Bill Obrien is not handling the isolation well he just traded away his top receiver who might be an all-time great in his prime. @DeAndreHopkins Well guess I’m cheering for the Cardinals now too. pic.twitter.com/QNunsWMckX

BILL OBRIEN IS THE WORST HEAD COACH IN THE HISTORY OF THE NATIONAL FOOTBALL LEAGUE https://t.co/fAJX3Qt2Xk

Wtf are the Texans doing trading Hopkins for David Johnson? Why trade one of the best receivers in their prime for a running back that hasn’t produced in years? They have to be working a trade for a top WR.

Texans wtf are you DOING ???? Like no disrespect but YOU DISRESPECTED one of the best in the GAME. Like WHAT ????