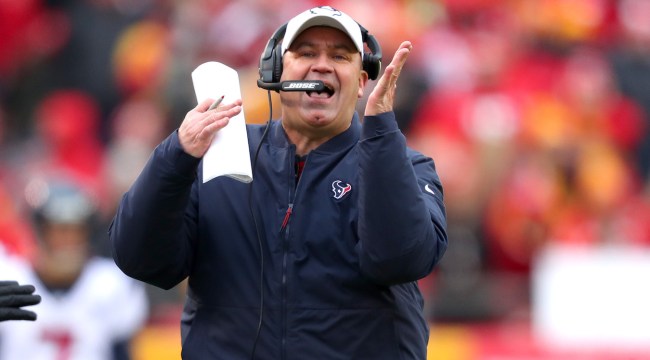 It can be argued that Bill O’Brien had the worst coaching performance in recent NFL history on Sunday.

After his team handed him a whopping 24-point first-quarter lead, Houston Texans head coach Bill O’Brien seemingly did everything in his power to throw that lead away, as his team somehow went into halftime losing by four points. Just think about that for a second — in the course of 15 minutes, the Texans went from being up 24-0 to being down 28-24. That takes truly astronomical levels of incompetence.

Despite being down just four points at the half, everyone watching that game knew it was over, as the Texans simply had no answer for Patrick Mahomes and the red juggernaut that is the Kansas City Chiefs offense. And that’s fine! A lot of people get blown out by the Chiefs — they’re incredible and Patrick Mahomes has the makings of a Hall of Fame quarterback. It can be excused.

But what cannot be excused are some of O’Brien’s decisions and subsequent self-inflicted wounds, particularly when it comes to two 4th-down decisions he made in the decisive second quarter.

Up 21-0 early in the second, the Texans faced a 4th-and-1 from the Chiefs’ 21-yard-line. O’Brien thought about going for it, but instead, just kicked the field goal because O’Brien “felt like we didn’t have a great play.”

You know, just a highly-paid head coach not having a handful of go-to plays for one of the sport’s most crucial scenarios — fourth and short.

Then, on the next drive — after previously opting not to go for 4th-and-1 from the Chiefs’ 21-yard line — O’Brien called a fake punt on fourth-and-4 their Houston’s own 31-yard-line. And guess what? They were stuffed! Of course! Just shocking coaching. I have literally never played organized football in my entire life and I know better than that.

Folks, I’m a New York Jets (and Mets!) fan, so I know what head coaching incompetence looks like, and this is it. So, check out the videos of O’Brien attempting to explain himself if you’d like, but I warn you, it’s incredibly sad and pathetic and could put you in a dour mood on his fine Monday morning.

O'Brien claimed he was thinking about challenging the spot on the fourth-and-1 field goal. "I felt like I had a first down, and by the time I got to … it was a fourth down, I just decided to kick the field goal." pic.twitter.com/FQlZBB3FpZ

Bill O'Brien: "I definitely thought that we were going to have score more than 24." pic.twitter.com/EM2gXhtfZK