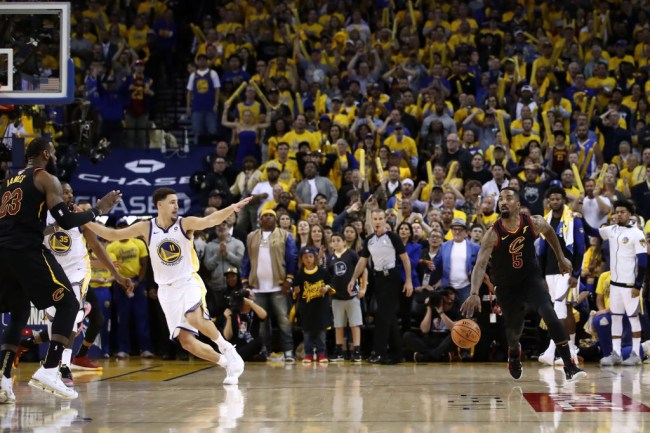 Despite being a sweep the NBA Finals provided a lot of drama on and off the court especially after JR Smith’s game 1 blunder which infuriated LeBron James to the point that he broke his hand against a whiteboard. Tonight, Bill Simmons and HBO will give us a behind-the-scenes look of what went down during the Finals between the Warriors and Cavs in a new doc called “Courtside at the NBA Finals”

Courtside at the NBA Finals” makes its Home Box Office debut Tuesday, June 19 at 9 p.m. Produced by The Ringer’s Bill Simmons, the one-hour documentary chronicles all the on the court battles and behind the scenes drama of Cavaliers vs. Warriors Part IV: from J.R. Smith’s brain fart and Draymond Green and Tristan Thompson’s shoving match in Game 1 to Kevin Durant’s deja vu dagger three in Game 3 and Stephen Curry hoisting his third NBA Championship trophy in four years.

Simmons seems very passionate about the project when he talked about it on Twitter.

Tonight, HBO, 9pm (re-air at 11pm): we created a new type of NBA Finals show and tried to capture the ever-changing narratives, the artistry, the drama, and what it’s like to be there. Inspired by NBAE’s 1980s NBA Finals shows that I grew up watching.

While there have been several trailers about the project we haven’t seen much footage about what “Courtside” actually is, but with no other NBA related content on tonight “Courtside” should give us plenty to talk about before Thursday’s NBA draft.

Courtside airs tonight at 9pm and will be available on HBOGO afterwards.