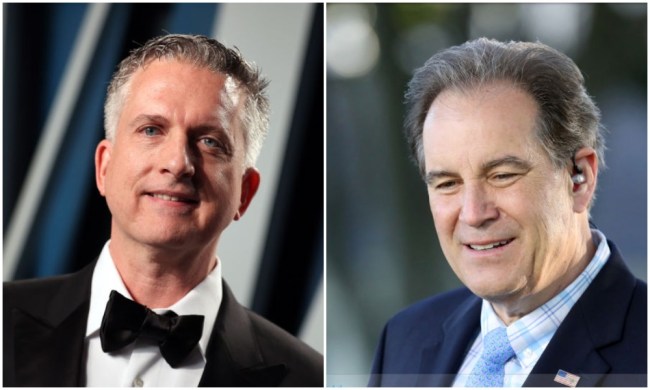 As Hideki Matsuyama tapped in for bogey on the 72nd hole to win the 2021 Masters, Jim Nantz said “Matsuyama is Japan’s first Masters champion.” Will it go down as one of Nantz’s most memorable calls? No, but it certainly wasn’t a bad one. He made an emphatic statement about an emphatic moment with Matsuyama becoming the first male golfer from Japan to win a major championship.

It’s safe to say that the majority of viewers weren’t expecting some elaborate call from Nantz. For the most part, it was an uneventful Sunday at Augusta thanks to Matsuyama beginning the final round with a four-shot lead and doing just enough to get the job done.

Nantz’s call was fine, but it wasn’t good enough for Bill Simmons.

During his recap podcast with The Ringer’s Kevin Clarke, Simmons went off on a tangent about how disappointed he was with Nantz’s call. He even brought up cancel culture and how he believed Nantz was scared during the final moments of the broadcast.

“We were hoping for one of his classic pre-baked one-liners when Matsuyama won The Masters. I think he was scared off,” Simmons said. “He felt nervous to me the last twenty minutes, um, cancel culture, I don’t think Nantz wanted to go near anything. He kept kind of throwing it to Faldo and then when Matsuyama hit the…Nantz basically said, ‘Hideki Matsuyama, the first Japanese golfer to win The Masters.’ I’ve never heard him put less thought, energy, creativity, anything into one of his calls and it was a scared Jim Nantz, let’s be honest.”

Being a broadcaster himself, Simmons obviously watches and listens to sporting events differently than the regular viewer. He’s looking and listening for things that stand out, and to him, Nantz’s call was flat-out boring. Simmons wasn’t done there, he even made a point to bring up how Nantz recently signed a new contract, which somehow makes his call of Matsuyama’s win even more disappointing in Simmons’ opinion.

“He just played it chalk. You know what? You just signed a new contract Jim Nantz. We don’t want a scared Jim Nantz. Come up with some sort of line. Anything? Disappointing.”

It’s clear that Simmons didn’t think Nantz referenced Asia or Japan enough during the broadcast, or in the manner Simmons would have liked to hear, but he must have missed Nantz referencing the Land of the Rising Sun a handful of times throughout the broadcast while reminding viewers every two holes that this would be Japan’s first major winner in the men’s game.