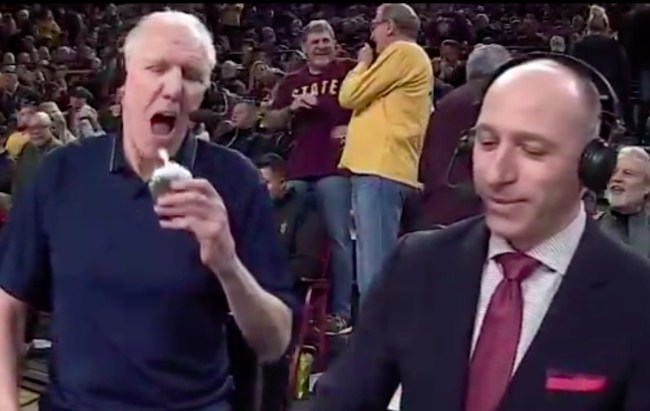 Depending on how you look at things, Bill Walton is either a walking example of why people should never do psychedelics or living proof that the world would be a better place if the general public occasionally made some room for a slightly different type of mushroom in its diet.

Over the years, Walton has carved out his own unique space in the sports broadcasting business—a space where shirts are entirely optional and there’s nothing particularly notable about going off on a tangent about bridges in the middle of a basketball game.

Relax, clear your mind, and let Bill Walton educate you on Miles Bridges and bridges in general pic.twitter.com/DAkUFnYdWb

Walton’s signature insanity has been on full display over the past year or so, including the time he used Kevin Durant’s ball-handling skills as an excuse to launch into a non sequitur about Steve Jobs.

There was also the moment Walton dug deep into his reference bag and alluded to Larry Craig’s infamous bathroom incident while discussing “wide stances.”

However, the human personification of a Grateful Dead show may have outdone himself over the weekend while covering a game between Arizona and Washington State, where he found himself with a cupcake topped with a lit candle in his hand and decided to consume it like an alien lifeform that’s still having trouble processing the concept of eating.

At this point, there’s not much that Walton can do that’s able to shock me but I have to admit even I was taken aback by his sheer willingness to consume a flaming candle in front of a national audience.

After the video started to make the rounds, someone managed to track down his son Luke to get his thoughts and the Lakers coach revealed this wasn’t a Walton family tradition but that it didn’t surprise him in the least.

Luke just confirmed that his father did not do this at his or his brother’s birthday parties when they were growing up … but it also does not surprise him. https://t.co/GYPfaMsenG