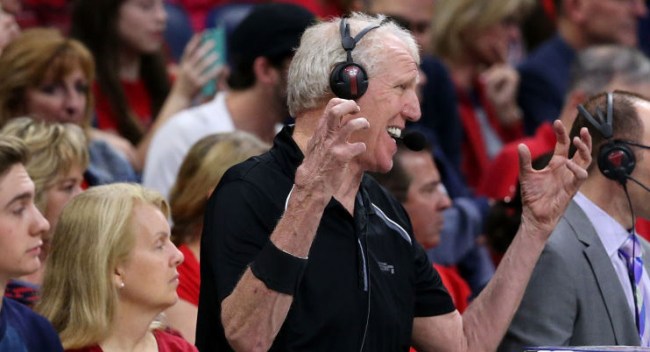 It’s because, ever since he began broadcasting basketball games, the audience has truly never known what words might be coming out of his mouth next.

Walton’s verbal detours from the game he’s actually supposed to be broadcasting have become legend. Heck, even the texts he sends his broadcast partners are batsh*t crazy.

So was it really a suprise when during Wednesday night’s Gonzaga vs. Washington broadcast that Walton would somehow work in a reference to former Idaho senator Larry Craig?

As you may or may not recall, Craig was arrested in 2007 at the Minneapolis-St. Paul International Airport after allegedly soliciting a male undercover police officer for sexual activity in a men’s restroom.

During his interview following the arrest, Craig told police he merely has a “wide stance” and was just picking up a piece of paper from the floor.

Fast forward 11 years, and, yep, there was Walton referencing Craig when discussing a foul call with play-by-play announcer Dave Pasch.

Pasch: “By the way, just to clarify, the reason they called the foul on Dickerson, as Nowell gets the basket, was, they said, an excessive wide base. They said the base was too wide outside the shoulders, so that’s why they called it on Dickerson, because you can’t get around that.”

Walton: “Well, since we’re right next to Idaho, wasn’t it Larry Craig who had the wide stance?”

Pasch: “Jesper with the entry pass, and Norvell!”

Check out these other A+ Walton-esque moments that happened during Wednesday’s broadcast.

My favorite line is when @BillWalton asks @DavePasch what's your name again, 😂 it's only their 7th year working together. pic.twitter.com/0QGXHlqJ1V

“Auburn may not lose any games at home. That game was so incredible in Auburn that they set the Washington bus on FIRE as it left town! We’ll show you Yankees what to do!”

I will listen to any game Bill Walton calls pic.twitter.com/sy8mNE5MKo

Rui Hachimura throws down on the break and Bill Walton waxes poetic pic.twitter.com/3omkOaSRf7