Whatever Bill Walton Took Before The Warriors-Blazers Broadcast Last Night, I Want Two Of Them 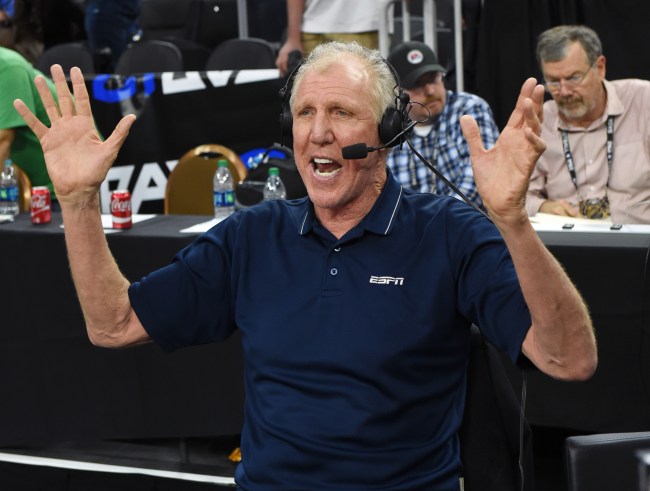 If a magic genie gave me came out of a lamp and granted me three wishes, they would unequivocally be the following: 1.) a seat on the Smash Mouth tour bus 2.) $1 million or one bitcoin 3.) For Bill Walton to follow me around for the rest of my days color commenting my every move.

Last night the hippy Hall of Famer gifted NBA fans with his presence during the Warriors-Blazers game. Walton, typically a Pac 12 broadcaster, was sent up to the majors with David Pasch as ESPN sent NBA broadcasters Mark Jackson and Hubie Brown to Duke. A fun lil swap.

The game itself was incredible, with Damian Lillard dropping 44 in a victorious effort and Kevin Durant tallying up 50. But the real star of the night was Bill Walton. He’s so unpolished and whimsical, yet so goddamn entertaining. A true one man wrecking crew. Check out some of the highlights of Bill Walton commenting on the game.

Walton gets deep with Doris.

Doris Burke: “any thoughts about this game”
Bill Walton: pic.twitter.com/3fhYGfcYfn

His incessant fanboying of Steph Curry:

Bill Walton “Steph Curry is Mozart. Mozart could write music before he wrote words. And that’s what Steph Curry does” pic.twitter.com/0ai1ztcx1Z

Bill Walton “I wouldn’t have guessed that” pic.twitter.com/bVo9gahJ2V

“I’ve never lost more faith in humanity than that moment.” — Bill Walton talking about losing the ESPN Celebrity Game as a coach.

"I dropped out of the political science world because Nixon was president and I was like, this isn't a science!" Bill Walton, very topical

This dude is a national treasure.