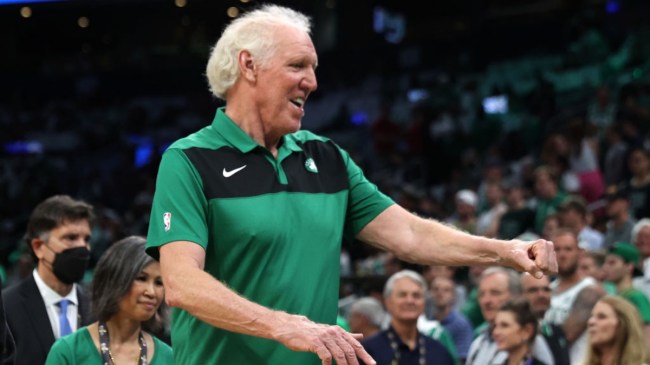 Over the past few years, alternate broadcasts of sporting events have been growing in popularity.

First it was the SnoopCast on the Tuesday Night Contender Series.

Then it was the ManningCast for Monday Night Football.

Other broadcasts have copied the formula since.

Now the sports world is getting what is sure to be its most entertaining alternate broadcast yet.

The world is getting a Bill Walton broadcast on NBA games.

Starting on Monday, Walton will be bringing the “Throw it down with Bill Walton” broadcast to NBA League Pass.

Today, he spoke to the New York Post about it and the idea sounds exactly like what you’d expect from Bill Walton.

We’ve got the NBA intergalactic platform. We’ve got the world’s greatest basketball players. We’ve got the business. We’ve got the entertainment. We’ve got the sports world. We’ve got the celebration of life and health and all good things here. We have fantastic guests. I’m the luckiest guy in the world. We are set for blastoff and the volcanic eruption on Monday night Jan. 23. Seven o’clock Pacific time, be there. Miss this at your own peril. You’ve been suitably warned. I’m fired up.

Anybody who has spent the last few years regularly watching “Pac-12 After Dark” knows exactly what to expect from this.

Walton is one of the sports world’s most interesting broadcasters as he is always ready with a story to tell mid-game regardless of what is happening on the floor.

His years on Pac-12 broadcasts have also brought fans all-time great moments like the time he tried to eat a cupcake with a lit candle on it.

It’s hard to imagine what fans will hear from Walton on these broadcasts, but we can only hope he has plenty of stories about The Grateful Dead ready.