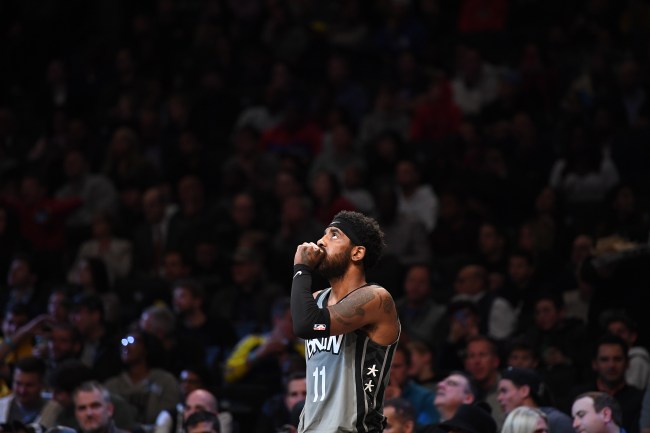 New York Knicks fans do not need another reminder that they fanned on another high-profile free agent. They walked through the foul-smelling streets of Manhattan feeling like the middle schooler who has the best toys and snacks in class but still cannot convince anyone to come to his birthday party. I feel kind of sorry for them. Just kidding. Their suffering brings me more joy than the birth of my first son.

The Knicks are currently 1-6.

Meanwhile, right over the bridge, the Brooklyn Nets are less bad, posting a 3-4 record which their eighteen fans are pleased about.

The Nets main attraction is Kyrie Irving, who just dropped 39 points in a win over the Pelicans and matched the longest streak of 20-point games (7) for a player at any point in the Brooklyn era.

As a Celtics fan, the only thing I’ll tell Nets fans is: don’t crown Kyrie king until his seasonal depression kicks in.

Orrrr, you can throw this billboard up directly outside of Madison Square Garden to mock the self-hating Knicks.

New @KyrieIrving billboard on the corner of Madison Square Garden 👀

Believe me, I’ve been there before.

FIRST LOOK: New billboard going up at the Kenmore Monster on Beacon Street in Boston playing off the fact that Kyrie’s high school team was nicknamed the Celtics. pic.twitter.com/nYaidklZAL

We’ll revisit where we stand in February.