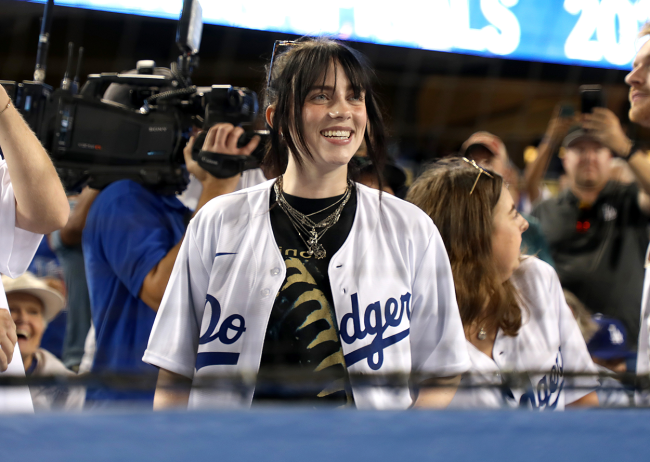 When the Dodgers take the field at Dodger Stadium, there is a high probability that at least one A-list celebrity is somewhere in the stands. Although he, she or they may not arrive until the fourth inning — because Los Angeles — there is usually someone famous watching.

On Thursday night, one of the biggest names in music was in the house. Pop superstar Billie Eilish and some of her friends and family got the full celebrity treatment and got to hangout on the field before the game.

.@billieeilish at Dodger Stadium is everything we wanted. pic.twitter.com/N3seiBOKFN

Once the game got underway, Eilish was seated behind the visitors dugout on the first base line. Although there is always someone famous at Dodger Stadium, Eilish is from L.A. and grew up a fan of the team. At least, casually.

She got the full experience on Thursday and the ESPN broadcast even caught her crushing some dinner when it cut to her on camera.

Hometown hero @billieeilish is at the Dodger game in her jersey tonight 😍 pic.twitter.com/TC3KBZChIQ

Later in the game, during the middle of the sixth inning, Eilish got to experience something that the overwhelming majority of people never will. A familiar bass line began to play over the speakers and the ‘Dance Cam’ appeared on the scoreboard jumbotron in centerfield.

As her 2019 smash hit ‘bad guy’ played over the speakers, the camera cut to Eilish and she got to jam out to her own song. It was the ultimate flex.

Billie Eilish was dancing to her own song at Dodger Stadium 😂 💃 pic.twitter.com/OQjA6zZ7VA

my friend sent me this video of billie and finneas at tonights dodgers game pic.twitter.com/RwjZrh10nr

Although her brother Finneas did not adhere to the rules of the ‘Dance Cam,’ you could tell that everybody was having a blast. What a moment.

And to make things better, Los Angeles won the game.

1-0 when @billieeilish and @finneas are here. pic.twitter.com/NTV9gUs4u0

Is there any bigger sign that you “made it” than dancing to your own song on the Dance Cam at Dodger Stadium? Epic.