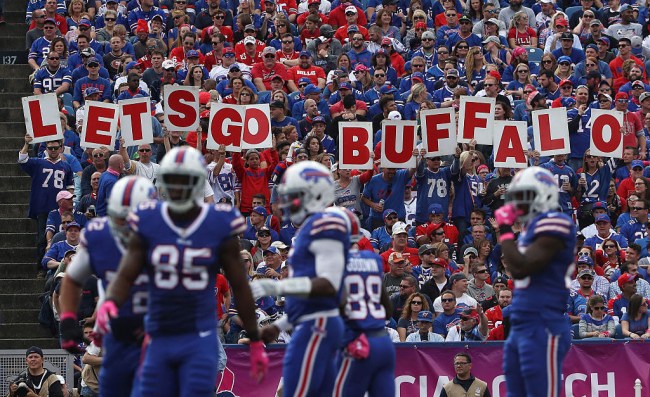 Every week, NFL fans around the country stream into stadiums with signs in tow in the hopes they’ll maybe get a few seconds of screen time to justify the effort they put into making them.

I don’t think there are many people out there who think about this as much as I do on a regular basis but there aren’t many things that tickle my funny bone more than picturing a 47-year-old plumber spending a solid chunk of his Saturday browsing the aisles at Michaels and heading home to make a fence out of cardboard. 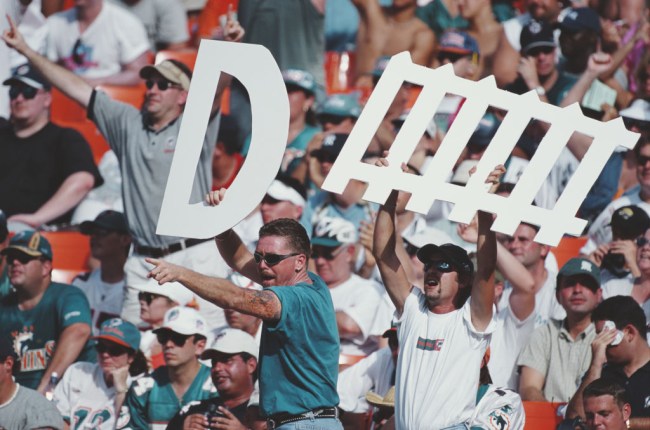 If the mental image of those two dudes sitting at a kitchen table painstakingly cutting things out with an X-Acto knife doesn’t make you at least mildly amused then you might want to visit a doctor to get your sense of humor checked.

However, not everyone has time for that.

The Buffalo Bills easily have the most entertaining fanbase in the NFL, and over the past few years, Bills Mafia has provided the world with countless moments of brilliant idiocy— most of which involve jumping through flaming folding tables.

However, during last night’s game against the Patriots, one Bills fan put the rest of the sporting world on blast with the best sign I think I’ve ever seen at an NFL game.

Behold it in all of its glory.

How much did this graphic cost? #MNF pic.twitter.com/Lxj7CyrmpW

Who needs to buy magic markers and posterboard when you can use the office printer for free?

The best part of this sign is that for as low effort as it is (how hard is it to center text?) the guy who made it still had the foresight to switch the Word document to landscape for reasons I’ll probably never know.

Thank you, Bills Mafia. Thank you from the bottom of my heart.