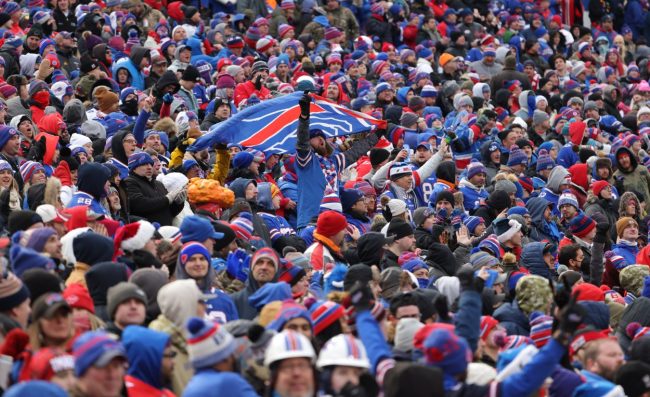 Bills Mafia never fails to be the most impressive fanbase in football. The Buffalo faithful are amongst the most passionate in all of sports and give everything they have for their team at every opportunity.

Even after a crushing playoff loss.

On Sunday night, the Bills fell victim to the NFL’s overtime rules and were eliminated from the playoffs. The game itself could not have been any better, with 35 points being scored in the final two minutes, but the result was disappointing for the visitors.

Despite the loss, and despite the fact that temperatures dipped down close to zero degrees, the Mafia was out in full force. Buffalo fans lined up outside of the airport to welcome their team home from Kansas City.

The first group arrived at about 11:00pm EST.

The first group of #Bills fans have arrived at the airport to welcome the team back home after a heartbreaking loss to the Chiefs. pic.twitter.com/aggAGOjqhG

And then the crowd continued to grow.

More and more #Bills fans are gathering at the Buffalo airport. pic.twitter.com/mAEwWsZwcY

Some of them even brought tables to jump through. Even though the result was a loss, spirits were high.

#Bills fan James brought a table that his kids painted. He plans to go through the table this evening with anyone willing. pic.twitter.com/601ovsCD3l

The Bills Mafia reached its peak around 2:30am EST, moments before the plane was expected to arrive.

#BillsMafia awaits the arrival of the #Bills’ team flight from Kansas City. Should be rolling in momentarily. pic.twitter.com/EngQUda6rT

They sang their hearts out in the freezing cold.

And they’re still chanting the Shout Song at 2:30 a.m. EST in the morning. #BillsMafia pic.twitter.com/D45wNQXjdG

The team finally pulled in just before 3:00am.

The #Bills have arrived back home to Buffalo. pic.twitter.com/NnfwJke6ML

Meanwhile, the Mafia was thrilled to welcome them home and let them know how proud they were for the effort even in defeat.

Fans finally dispersed just after 3:30am EST and they were proud to hold their heads high.

Some end-of-the-season thoughts from Bills fans who greeted the team at the airport at 3 a.m.

More reaction coming up on Daybreak until 7 on @WGRZ pic.twitter.com/b9b8pxzNhz

Bills Mafia is truly unlike any other fanbase. They are the best. After losing in the playoffs, they waited upwards of four hours in sub-freezing temperatures to cheer their team as they returned back to Buffalo. Remarkable.