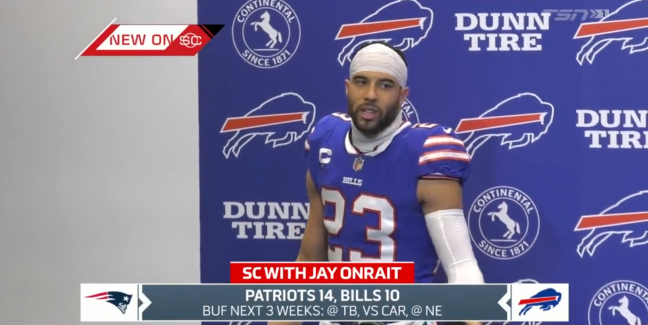 The New England Patriots ran for a season-high 212 yards on Monday Night Football against the Buffalo Bills. Amid terrible, extremely windy conditions, head coach Bill Belichick committed to the ground game and ran the ball 43 times, setting a franchise record for least pass attempts in a game with three.

After the game, which Buffalo lost 14-10, Bills safeties Micah Hyde and Jordan Poyer threw a fit. They were asked if losing in that way, referring to rushing numbers that had not happened in 40 years, was embarrassing.

“I mean, what kind of question is that?” Poyer asked.

Hyde followed up with, “What are we doing bro?”

As the reporter, Jerry Sullivan, tried to clarify his very reasonable inquiry, Hyde and Poyer had a full-blown meltdown. They dismissed an answer and reiterated that New England only scored 14 points.

“We made stops when we had to. They had one big run. I mean, they’ve got good backs,” Poyer said. “They kept coming back to a couple runs. I mean, I don’t know how you want us to answer that question.”

Hyde said that he would remember Sullivan’s question.

Jordan Poyer and Micah Hyde were not happy when asked if they were embarrassed by the run defence tonight. pic.twitter.com/5lwqZ8CRyh

The wild overreaction to Sullivan’s question was not done there.

On Hyde’s way out of the locker room, he turned back to the reporters in the room and told Sullivan not to do what he did. He even brought up respect, implying that Sullivan’s question was disrespectful.

A reporter, possibly Sullivan, can be heard trying to defend the question before the clip cuts off.

As Micah Hyde was leaving the podium, he had this to say to WIVB reporter Jerry Sullivan, who asked the question about the Bills run defence. pic.twitter.com/Qigk975fzl

Perhaps the loss had Hyde and Poyer upset. Perhaps it really was the question.

Regardless of what it was, there was no reason for them to go off the way that they did.