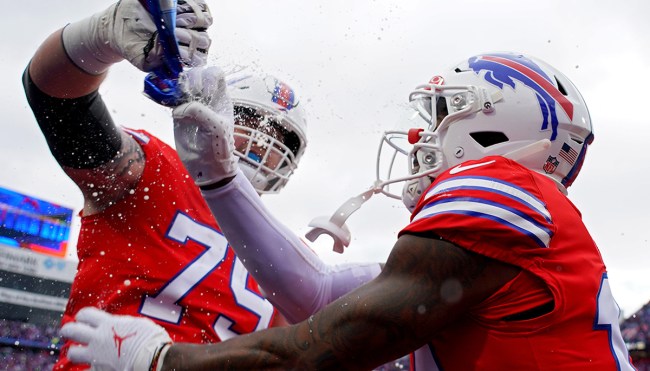 It’s been a few years since the NFL mercifully tweaked its celebration rules to let players have a little bit of fun following a score, and since then, we’ve been treated to some fantastic stunts courtesy of guys who’ve pulled out some great choreographed moves and harnessed some particularly creative props.

During last week’s game between the Bills and the Panthers, Buffalo wide receiver Stefon Diggs decided to channel his inner Stone Cold Steve Austin when he commandeered a beer from a member of Bills Mafia (offensive tackle Spencer Brown also decided to get in on the action).

After the game, Diggs hopped on Twitter and asked for some help finding the man in question so he could buy him a beer as compensation.

So me and a friend of mine had a lil too much fun. Spilt this poor man’s beer? Find him for me wanna buy him one ♥️💙 pic.twitter.com/WKwDZhMkc1

It didn’t take long for the fan in question to be identified as Richard Donohue, who works as an insurance agent in nearby Batavia, New York and has been a Bills season ticket holder for four decades.

And has had the same seats every year, for the people looking for him I can help if needed because he is not on social media. This experience has been amazing and was all he could talk about last night @BuffaloBills

Labatt—the brewery behind the unofficial beer of Bills Mafia—sent Donahue a care package even though the beer in question appeared to be a Bud Light. After he was identified, Diggs and Brown decided to go on a beer run and the latter personally delivered cases containing a grand total of 144 cans to replace the brew.

Shoutout @TooTallo_o @stefondiggs thank you guys for hooking us up with some @budlight we’ll give these a good home #gobills @BuffaloBills pic.twitter.com/4lHhcthNAd

According to The Buffalo News, the two men chatted for a few minutes after Brown dropped off the early Christmas present before Donahue asked for one of his own: “Just beat the Patriots.”

The Bills will have the chance to give him a belated gift when they face off against New England on the 26th.