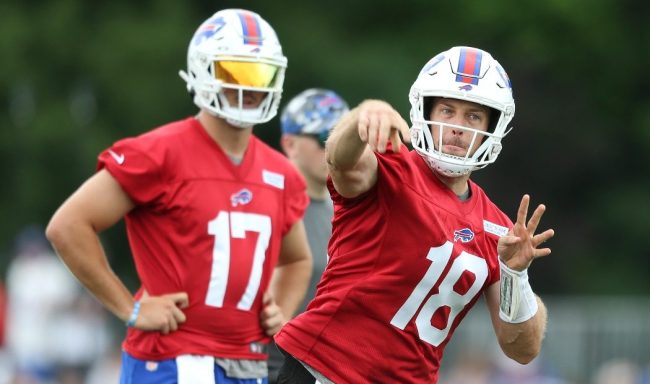 The regular season is right around the corner and the Buffalo Bills are in the middle of preparing for a long year of football. They should be one of the best teams in the league, as their roster is completely stacked top to bottom. However, every once in a while it’s nice to see the players have some fun, as the Bills’ backup quarterback Case Keenum lightened up the mood in training camp.

Thanks to a video provided by The Athletic NFL, we get to watch Case Keenum hilariously fool his teammates to acquire their signature. With just a bucket hat, a pair of sunglasses, and a fake accent, he’s able to fool most of the Bills players and coaching staff before getting caught. Watch the clip for yourself below!

The backup quarterback role might just be the best job in America. Especially when you play on the Bills and the starting quarterback is Josh Allen. Case Keenum has made a career of it, as he’s viewed as one of the best backups in the league. He gets to prepare alongside one of the best players in the NFL while pulling hilarious shenanigans on his teammates.

Everyone needs a good laugh here and there. It’s nice to see the Bills having fun during training camp as they prepare for the upcoming season. This franchise has high hopes this year, as the organization fell one game shy from going to the Super Bowl. It’ll be straight business throughout most of the year. Luckily Case Keenum is there to remind his teammates to have some fun along the way.