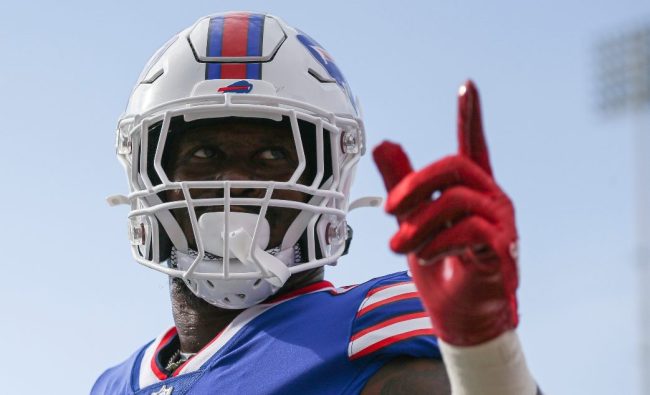 The Buffalo Bills are primed for a Super Bowl run in the upcoming 2022 NFL season. They arguably have the best roster on paper which bodes well for their chances. However, Von Miller is hoping to win the third ring of his career and clearly wants it more than anything. So much so, that he’s actively recruiting a former teammate to join him in Buffalo.

In an Instagram post, the star pass rusher shared a photoshopped image of Odell Beckham Jr. wearing a Bills uniform. The two of them won a Super Bowl ring last year with the Los Angeles Rams and the two have gone back and forth on social media about potentially reuniting again.

Von Miller is recruiting OBJ to the Bills 👀 pic.twitter.com/LT2WpN7VnP

Beckham is currently recovering from his ACL tear in the Super Bowl and it’s not clear when he’ll be able to return. The Rams have been rumored to be interested in signing the star wideout to the roster but nothing has come to fruition. For that reason, Von Miller’s recruiting could give the Bills the motivation they need to go sign Odell Beckham Jr.

We’ll see how it all plays out, as Beckham has been patient throughout the offseason. He’s not likely to help much in the first portion of the regular season. However, he could provide the Bills with a major boost in the pass offense when it matters most.

Look rumors regarding Odell Beckham Jr. to ramp up with the season looming around the corner. Los Angeles is still a legitimate landing spot for him but the Bills could swoop in if they wanted to. Especially considering Von Miller is actively recruiting his former teammate.