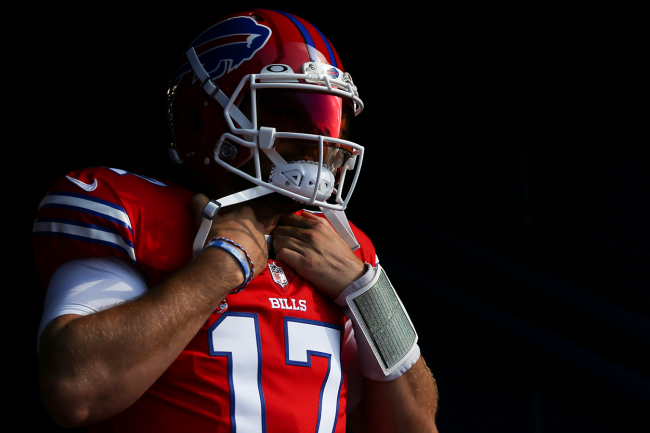 The NFL approved a rule change in 2021 that allowed for an alternate helmet to be worn with throwback or color rush uniforms starting this season. Thirteen teams have already announced that they will rollout new lids this fall, but the Bills are not one of them.

Even if Josh Allen led Buffalo and NFL fans to believe otherwise.

On Friday evening, the Bills held a full open practice and scrimmage at Highmark Stadium. When star quarterback Josh Allen took the field by himself, there was bound to be excitement amongst the thousands of excited football fans in Buffalo.

However, things were brought up a notch when Allen came out of the tunnel wearing a new helmet. On his head was the team’s throwback red helmet with an icy visor.

Allen jogged far out onto the field and sent the crowd into a frenzy. The red helmet with the red jersey looked incredible.

Josh Allen comes out of the tunnel in a red helmet#BillsMafia @WKBW pic.twitter.com/irJz6HcuTN

There was only one problem. It was a prank.

Allen got NFL fans extremely excited for the return of Buffalo’s throwback red buckets. But he was lying and Allen is remarkably cruel for getting hopes up.

Right before practice got underway, Allen was met by an equipment manager who took the red helmet and gave him his conventional white helmet in exchange. Allen waved as the helmet departed the field.

Because Allen walked onto the field wearing a red helmet, understandably, everybody thought that it meant the team was bringing them back. They are not.

The Bills official team Twitter account cleared everything up after the fact and Allen responded, saying that he is not going to apologize for the prank.

Disappointing would be an understatement. Buffalo and football fans will have to wait at least another year to see the return of the red. Sad.