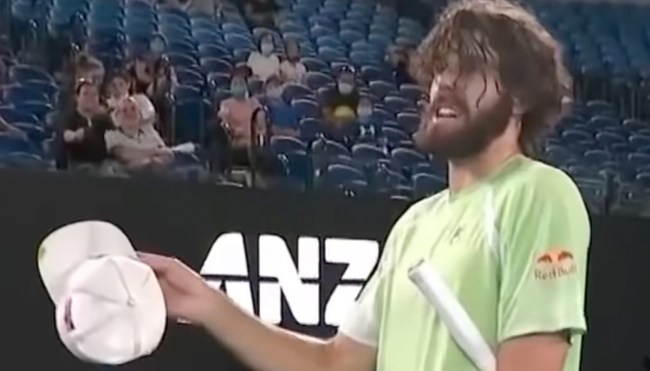 There’s only so much you can do to prevent nature from interfering when you hold a sporting event outdoors, and while inclement weather may be the most notable defender when it comes to delaying a game, there are plenty of other potential culprits that can cause things to take an interesting turn.

It’s hard to think of a more bizarre example that highlights that phenomenon than what unfolded when Randy Johnson delivered a pitch during a spring training game in 2001 and proceeded to obliterate a dove that picked the worst possible time to swoop across the field.

I have a hard time believing any avian-related delay will ever manage to top that, but one bird did what it could during a strange incident that unfolded at the 2022 Melbourne Summer Set.

During the second set of Thursday’s match between Reilly Opelka and Maxime Cressy, the showdown was temporarily put on hold after Opelka informed the umpire a bird had pooped on the brim of his hat while he was attempting to return a serve.

While Opelka had a backup in his bag, the official ruled the sponsor’s logo on the replacement was too large, which sparked a fairly heated exchange where Opelka repeatedly stressed he was not going to play “with s—t on my head.”

The situation was finally resolved after the umpire told Opelka to trade his backup for a hat being worn by one of the ball boys, which he rocked before receiving a more suitable replacement from his locker after completing the game.

While some people claim getting pooped on by a bird is good luck, that sadly wasn’t the case for Opelka, who ultimately lost the match.