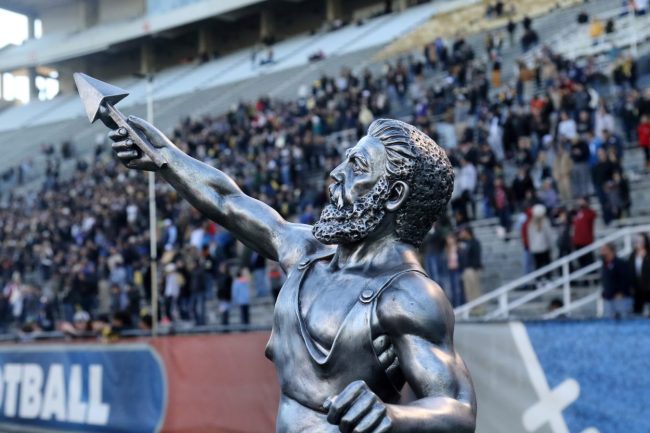 Most people consider the College Football Playoff National Championship trophy to be the best trophy in all of college football. However, those people have overlooked the Birmingham Bowl.

Every year, a team from the American and Southeastern Conferences square off in the TicketSmarter Birmingham Bowl. Previously known as PapaJohns.com Bowl and the BBVA Compass Bowl, the game has been played in Birmingham, Alabama since 2006.

The winning team is awarded the best trophy in college football, if not all of sports. It is modeled after a famous landmark in the state’s second-most populous city, The Vulcan, and features a literal bare butt.

The Vulcan statue is the largest cast iron statue in the entire world and one of the United State’s tallest statues of any kind. Reflecting Birmingham’s roots in the iron and steel industry, the 56-foot tall statue depicts the Roman god Vulcan. Vulcan is the god of the fire and forge and stands atop the statue with ironworker equipments.

The Birmingham Bowl statue is a smaller version of The Vulcan statue.

From the front, it is a strong-armed man wearing a blacksmith’s apron.

It is rather large.

However, from the back, it is an entirely different image. Vulcan is not wearing anything under his blacksmith’s apron, which does not go below his lower back.

Thus, his butt is right in your face. And it’s not just a slight peek, it’s full-on cheeks out for the Birmingham Bowl.

Yes…the “other side” of the @Birmingham_Bowl Trophy is identical to The Vulcan. pic.twitter.com/r2YJx1cGMp

The Birmingham Bowl trophy is high-key thicc with two cs. This year, in 2021, Auburn and Houston will have the honor of battling it out to hoist college football’s best (and most R-rated) trophy. May the luck of Vulcan and his butt be with them both.