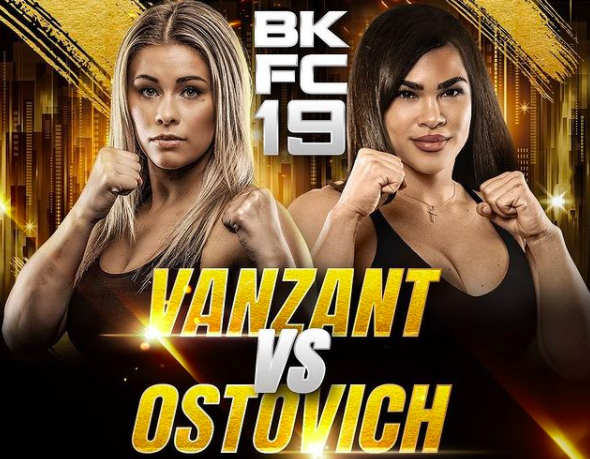 It’s one of the best times to be a sports fan, as lots of cool events are going on across the globe. But if you’re looking for something hard-hitting action that’s hella unique, look no further than BKFC 19, which is set to take place on Friday, July 23 from Tampa, FL.

So why’s BKFC 19 such a must-watch event? Not only does it involve some of the most intense fighting on the planet, but it’s the return of Paige VanZant, who headlines a highly-anticipated rematch with Rachael Ostovich from their first fight two years ago.

This BKFC card ALSO includes the highly anticipated fight between rapper Blueface and TikToker Kane Trujillo aka Neumane. In case you missed it, their showdown in June before BKFC 18 was INTENSE.

How to watch the BKFC 19 live stream

The BKFC 19 live stream is ONLY available as a PPV on FITE.TV  — a multi-device subscription-based streaming platform bringing LIVE bare-knuckle fighting and other combat sports.

The BKFC 19 PPV feat. Paige VanZant vs Rachael Ostovich is $39.99. The PPV will start at 9PM ET. Prelims will be streamed online for free, including on the BroBible Facebook page.

Sure, the Paige VanZant vs. Rachael Ostovich fight in the main event at BKFC 19, but there are a few other matchups worth keeping an eye on — including new ‘Platform Showdowns’, featuring Hip-Hop star BlueFace going head-to-head with his rival, Tik-Tok star Austin Sprinz. It’s no wonder why Dave Feldman, the President of BKFC, is excited about the night’s festivities, per BKFC.

“Since their tremendous fight in the UFC two years ago, combat sport fans have long expected a rematch between Paige VanZant and Rachael Ostovich,” said Dave Feldman, President of BKFC. “These two beautiful women have shown how tough and skilled they are and each have wanted the rematch to truly settle the score, once and for all.”

How Much Does BKFC 19 Cost?

With the live stream only available on FITE.TV, there’s nowhere else to catch the hard-hitting, intense action.

The summer sports calendar couldn’t be hotter, so you’ll want to make sure to take in the wildest event this month, BKFC 19, which has plenty of storylines and intriguing fights that nowhere else can deliver. So make sure to up get the BKFC 19 live stream now to avoid missing out on this highly-anticipated night.