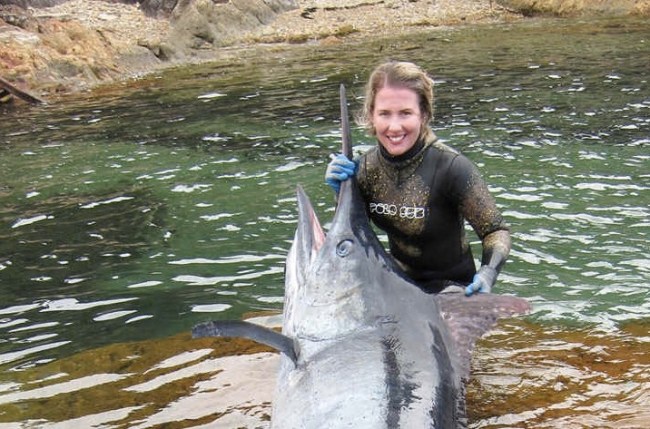 While hauling in this 154.9-kilogram black marlin, Nikki Watt was forced to swim the MASSIVE fish back to the boat instead of sitting in a fighting chair and reeling it in inch by inch. All of that dead weight was pulling on Nikki as she fought to bring in the world record.

You can see a picture of this massive fish below, but the story after the picture is even better. Nikki Watt wrote a firsthand account of spearing her world black marlin on FreeDive.net and I’ve pulled some excerpts below.

Here’s what it was like to drag in that fish by hand, as told by Nikki Watt:

I made the decent to 15m, and put a clean shot in the fish’s brain. It was then I noticed the first securing shot had toggled neatly all the way through the fish! It had also swam in so many circles that it had pig-tailed the cable on my slip tip! As I returned to the surface, I took a big breath and started to pull it up on the reel gun line. For every pull, I’d sink just as far! I had to adapt my style quickly if I was going to get this fish up.
I had to forcibly kick hard in an upwards direction each time I wanted to make ground on that dead weight, as I would sink with it on each upwards pull otherwise. By clipping the butt end of my second gun to the float, and by shortening & locking off of the reel line after each pull, my float helped keep my ground as well. By using the float for the second gun, I also avoided getting tangled in the reel line had the fish run again. I found it much easier to use the reel line to pull the fish up, as compared to the stretchy line on my original rig. At no stage did the Tommy Botha float dive under the surface, due to the stretch in the bungee and possibly the shot placement.
After I got it to the surface, my anxiety faded and excitement grew; I’d landed THE fish of a lifetime. I gazed upon it’s luminescent skin, the number of parasites over it’s body, and felt the roughness of it’s bill, even through my gloves. I couldn’t believe my eyes. It was so big I needed to use my entire body to pull it around, and swim it to the boat.
It had a very fatty flesh in the stomach so I couldn’t actually get it the right way up in the water (as you can see from the underwater photo), but I think it may have helped keep it on the surface.

You can read the full story of Nikki’s world record black marlin catch HERE on FreeDive.net. That firsthand account of this black marlin spearfishing world record has more details on the type of equipment Nikki Watt was using if you’re interested in that sort of stuff.