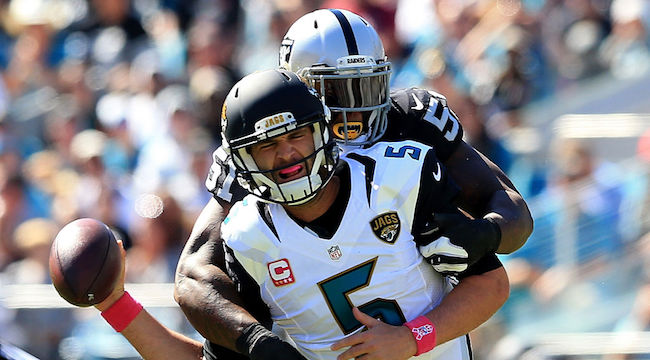 Nobody really expected much from Blake Bortles coming into this season. The Jacksonville Jaguars QB was vocally criticized in preseason practice by his teammates and was at the center of some incredibly juicy Instagram drama that made it clear there was a fair amount of trouble brewing in the locker room.

However, the team has managed to overcome the off-season adversity and is currently tied with the Tennessee Titans at the top of the AFC South with a 6-3 record. They’ll almost assuredly increase their win total to seven after they take on the depressingly hopeless Cleveland Browns on Sunday— a squad that is currently riding at 13-game losing streak that has no real end in sight.

It’s impossible to blame any single person for the Browns’ struggles, but DeShone Kizer certainly hasn’t helped the cause. The rookie quarterback has thrown 12 interceptions over the course of the season—which is three times his total number of touchdown passes— confirming yet again that the position is cursed for eternity.

On Wednesday, Bortles was asked if he had any advice for Kaizer, and he responded with what might be the least helpful piece of knowledge ever shared:

“Try to throw it to your team as much as possible.”

It’s worth noting Bortles came into the season leading the NFL in turnovers over the previous three years (a number that included 51 interceptions— 11 of which were pick-sixes). It appears he’s turned things around a bit, but I’d caution anyone who’s thinking about listening to him to take any advice he doles out with a grain of salt.