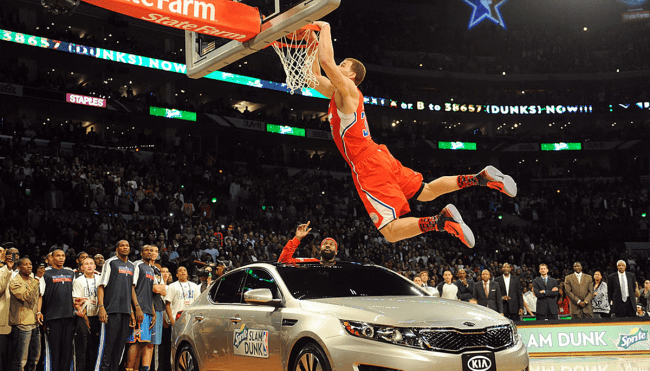 I’d argue the first decade of the new millennium was the Golden Age of the NBA Slam Dunk Contest. Vince Carter kicked things off with a performance that may never be topped, and in the latter half of the 2000s, fans were treated to the infinitely enjoyable David and Goliath rivalry between Dwight Howard and the impossibly aerial Nate Robinson.

In 2011, Blake Griffin attempted to pick up the torch when the All-Star festivities came to Los Angeles by recruiting a choir to belt out “I Believe I Can Fly” in front of a hometown crowd that watched him dunk the ball over a damn car with an assist from Baron Davis to deservedly secure the trophy.

Now, I’d be lying if I said I’ve spent countless sleepless nights over the past decade wondering about the fate of the Kia Optima Griffin launched himself over. However, Paolo Uggetti took the initiative to get to the bottom of that very mystery for The Ringer, and it turns out the car has had a pretty fascinating journey since that fateful night.

Griffin became the rightful owner of the Official Car of the NBA™ by winning the dunk contest, but he ultimately auctioned it off to benefit a cancer charity. The winning bidder was Henry Primeaux, the owner of a Kia dealership in Tulsa, Oklahoma who bought it for $35,220 with the intent of displaying it on the lot and using it in marketing campaigns to drum up publicity.

After retiring in 2015, he gifted the car to his grandson Michael Longa, an IT worker at a bank in Tulsa who is still driving it to this day. While he has removed the Sprite decals, the Kia (which has almost 89,000 miles on the odometer) is still emblazoned with the autographs Griffin signed on the door and steering wheel, making it objectively the coolest Optima you’ll ever encounter on the road.