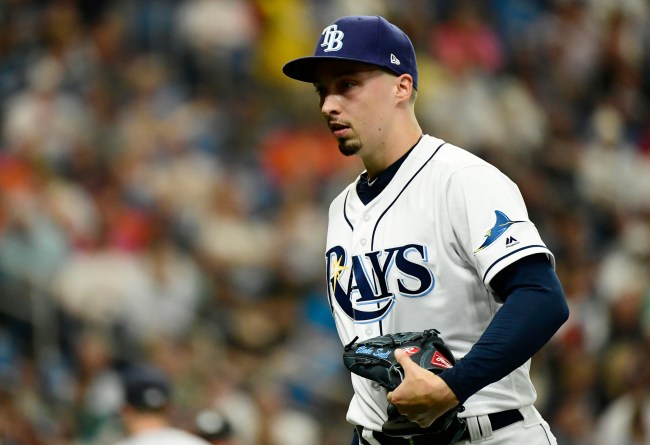 Blake Snell had a breakout 2018 season for the Tampa Bay Rays, going 21-5 with a 1.89 ERA. That production was good enough to win the American League Cy Young Award, so the 26-year-old hoped that last year was just the appetizer for plenty of more great years to come.

Unfortunately, Blake Snell’s quest at proving that he’s more than a one-hit wonder took a little bump recently, because the ace broke his toe and, although not expected to be serious — the lefty’s only supposed to miss one start — anytime an athlete get hurt, it’s cause for concern. Will there be lingering pain? Will he re-aggravate it? Hopefully Snell’s only sidelined for the one game and then he doesn’t have to deal with it again, because the dude is an absolute stud on the bump.

Naturally, anytime a player gets hurt, there’s always a reason for it. In the past, we’ve seen some strange things happen to athletes that forced them to miss games — like Sammy Sosa blaming a sneeze for a bad back during the 2004 season. While Blake Snell’s isn’t that absurd, he went into detail about what caused the toe injury, and it’s really, really confusing.

To paraphrase Blake Snell, here’s his mumbling, bumbling description of what happened to him, per FTW.USAToday.

“I got off the plane, went home, took a shower, got out of the shower, and then there’s like this big, like, granite thing that I don’t like looking at. And I lifted it – it’s like a three-piece set, and like this pole that comes up two and a half, three feet. And then there’s a top. You, like, put something on it? I don’t know what you would put on it in the shower. Like, it’s right outside the shower.

“So I’m like ‘ah I’m moving this, this is stupid.’ Dry it off, put my clothes on. I start to move it, I lift it and I go to move it where the tub is, just to set that down… but I lifted it up thinking ‘alright, I’m going to lift this whole thing up and put it over here and get it away from where I’m always at.’ And then I lifted it up and it wasn’t glued to the pole, and the pole came crashing down and then… yeah. That was the story. Really dumb.”

Who the hell knows what Blake Snell’s trying to describe here, but, whatever it is, it’s something that he doesn’t like being in his bathroom. Can anyone tell me what this “granite thing” is that the lefty’s talking about? It must be something fancy that only rich people have, because I have no clue what he’s talking about.

While the toe injury’s going to force the Rays’ ace to the sideline for a start, presumably, here’s to hoping Blake Snell returns to his normal self afterwards — and does a little bathroom renovation in the not-so-distant future, because nobody wants this to happen to him again.