Blueface vs. Neumane BKFC 19 – Why The Notorious Content Thief Is The Perfect Heel For This Fight 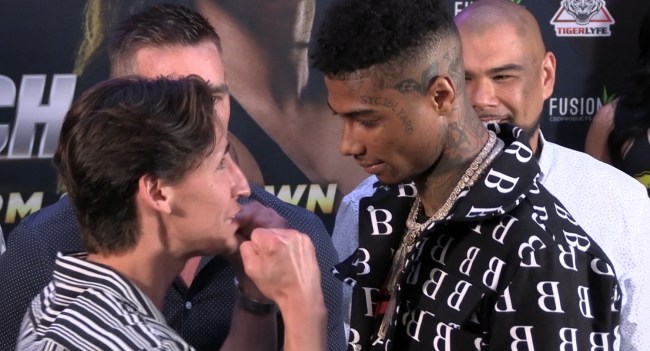 At the time of this writing, there is no one outside of the mother of TikTok star Kane Trujillo (aka Neumane) who believes he has a fighting chance against Blueface at BKFC 19 this Friday at 9PM ET on FITE.TV.

The FITE TV site allows its subscribers to predict a winner and the breakdown isn’t even close: 92 percent of users speculate that the much bigger Los Angeles rapper will make quick work of the 21-year-old TikToker.

Some of the discrepancies could be attributed to the fact that Blueface has a good four inches on Neumane. Or that the rapper was once a DII college football player, whereas Neumane looks like he got cut from the cross country team. But a significant portion of the variance is aspirational.

People want to see Blueface buckle Neumane because if there’s one thing America hates more than a cheat, it’s an arrogant cheat.

For the unenlightened, Neumane, who boasts 2.9 million followers on TikTok, came under fire in April for ruthlessly stealing content from smaller creators without giving them credit.

“The thing with him is that he doesn’t steal ideas, he steals the video word for word, uses the same sound, the same gestures, and even the same wording without giving any credit to the creator whatsoever,” Brodie Falgoust, known as @brodiefalgoust, told the Daily Dot via Instagram. “That is how he gained all of his following, and continues to do it still (even after being called out).

Neumane not only refused to apologize, but he doubled down, taking full responsibility for the copied videos blowing up,

“if the videos those creators made were responsible for the virality, then they would have gone viral when they created them. They did not, they went viral when I created my own versions inspired by the trend.”

The 21-year-old went as far to threaten Joey Bailey with the Lawyer Card, which fell on deaf ears.

The TikTok community is likely waiting with bated breath for Blueface to demolish their nemesis on Friday, but credit where it’s due: Neumane appears to be putting in the Work.

I wonder which creator he copied that from.