St. Louis Blues Score Crazy Goal Off A Dong Deflection After Ref Gets Hit In His Junk 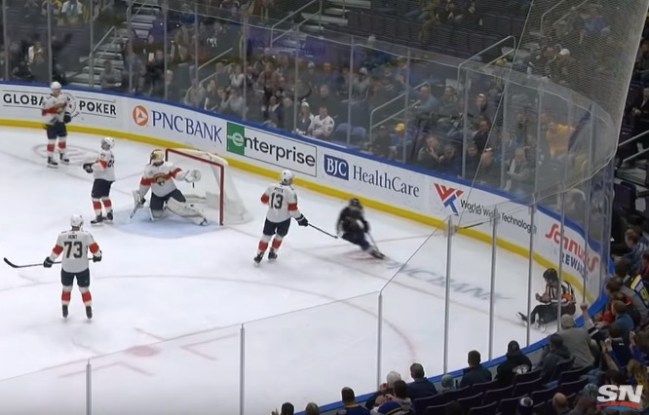 The St. Louis Blues scored one of the most improbable goals in NHL history last night after it bounced off the ref’s wedding tackle and went into the net from like 20 feet away.

Did the goal count? No. It was called back. Was it still one of the craziest goals you’ll ever see happen in an NHL game? You’re damn right, it was. The NHL has a rule stating that no goal counts if it deflects off of a referee and directly into the net.

In this case, that’s exactly what happened because Florida Panthers goalie Roberto Luongo was so stunned by seeing the ref get hit in his junk and fall to the ice. Also, the angle that puck took was insane. The NHL ice is 44-feet across and that ref was in the corner by the line. That puck took a bounce off his wang and went straight for the net.

Blues defenseman Robert Bortuzzo says he tried to dump the puck into the zone but instead hit referee Tim Peel square in the wiener. After the game, Bortuzzo shared what happened with reporters “I kind of double-clutched it, so I changed my angle. I caught ‘Peelsy,’ and I felt bad to be honest. I heard the horn and was shocked it went in—super-bizarre play. I didn’t know the rule obviously, so I put my hands in the air. I don’t think a lot of people knew the rule.”

I’ve already watched this clip more times than I’d like to admit because I’m still having trouble wrapping my mind around how that puck went in the net after bouncing off the dude’s dong from 20 feet away. This disallowed goal deserves some sort of an award.

Frankly, I think this goal should’ve counted. I get that the NHL has a rule prohibiting any goals where it’s a direct deflection off of a referee but that’s such an absurd deflection it needs to be rewarded. Also, Luongo needs to be benched for letting that into the net from 20 feet away.