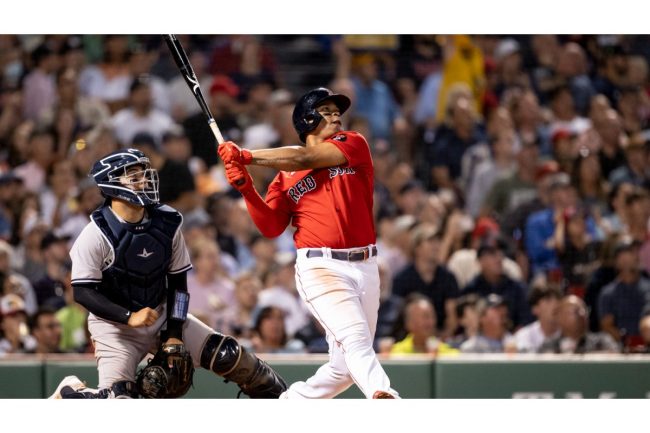 The Red Sox and Yankees are facing off in baseball’s best rivalry. Game 1 in the weekend series was highly entertaining with New York prevailing 6-5 in a hard-fought win. With the victory, the Yankees improve to 59-23 on the year, and 3-1 against the Bo Sox.

But while New York ended up leaving with a win in Fenway, the Yankees didn’t have the best player on the field in the series opener. That honor goes to Boston’s Rafael Devers.

Devers, who entered the matchup hitting well about .320 on the season, smacked a pair of home runs off of New York ace Gerrit Cole. The third baseman knocked in all five of his team’s runs while reaching base three times.

His monumental effort might’ve come up a bit short on Thursday, but it didn’t go without notice.

Bob Costas, who called the game, made a massive statement on Devers’s performance while throwing a bit of shade at Cole. Following Devers’s second home run on the evening, which brought the Red Sox to within one run, Costas said that the infielder owns Cole at the dish.

“Gerrit Cole may be bound for the hall of fame, but Rafael Devers OWNS him.” – Bob Costas pic.twitter.com/1ACBV0rW5T

As Devers’s second moonshot sailed into the centerfield stands, Costas was heard lifting the hitter up while absolutely crushing Gerrit Cole in the process.

“Back goes Hicks… It’s out of here! Into the centerfield bleachers. Gerrit Cole may be bound for the Hall of Fame, but Rafael Devers OWNS him.”

Costas has a bit of information to support his case, too. Devers has hit more home runs off the righty than any other player in his career. He now has six bombs versus Cole, which are two more than the next closest players.

Most career HRs vs. Gerrit Cole:

Social media was quick to react.

Gerrit Cole when Devers is up to bat pic.twitter.com/W33XZBHsXM

Yankee fans: Gerrit Cole is the best pitcher in the league!

6 of the 7 hits that Rafael Devers has hit against Gerrit Cole in his career have been home runs.

Cole left with the win on Friday, but he might still have nightmares about Devers stepping up to the plate.